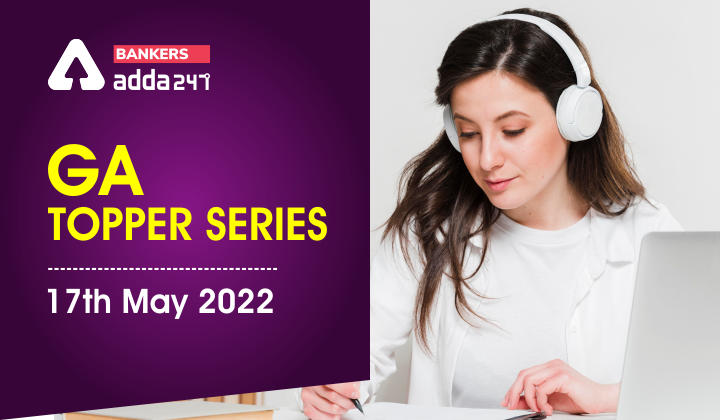 GA Topper Series: 17th May 2022: Hello Students, all those students who have cleared their prelims exams in the banking sector must be prepared with every topic in the General Awareness Section for the mains examinations. Bankersadda team has brought you up a new series in which we will come up with 10 questions with the correct answer and the detailed solution to the question.

Q1. What is the theme of the international day of families observed on 15 May?

(a) family is strength

(b) covid vs families

Q2. Who was the first chairman of CBSE?

Q3.  Which of the government-owned company topped the list in Forbes global 2000 for India?

Q4. Which of the following statements are correct?

Q5. India won the Thomas Cup after defeating which country. Secondly which sports does the Thomas cup is related to?

(d) none of the above

(a) department of agriculture

(b) department of economic affairs

Q7.  Which of the following statements are incorrect about Gaganyaan Mission?

Q8. Where and which number of COP held UN conventions on combatting desertification?

Q10. Who bought the dining out platform Dineout?

The International Day of Families is observed every year on 15 May to reflect the importance that the international community attaches to families. The theme for this year ‘Families and Urbanization’ aims to raise awareness about the necessity of family-friendly urban policy.

Senior IAS officer, Nidhi Chibber has been appointed as the chairperson of the Central Board of Secondary Education (CBSE).

Other news related to CBSE

Niti Aayog’s Atal Innovation Mission in collaboration with ISRO and CBSE has launched the ‘Space Challenge’ for school students across India.

Billionaire Mukesh Ambani’s Reliance Industries Ltd climbed two spots to No. 53 on Forbes’ Global 2000 list of public companies worldwide 2022. Reliance is the top-ranked Indian firm on the list, followed by State Bank of India at No. 105, HDFC Bank at No. 153, and ICICI Bank at No. 204.

Forbes Global 2000 ranks the largest companies in the world using four metrics: sales, profits, assets and market value Berkshire Hathaway took the No. 1 spot for the first time since Forbes started publishing the Global 2000 in 2003, dethroning the Industrial and Commercial Bank of China, which dropped to No. 2 after nine consecutive years at the top of the list. Saudi Arabian Oil Company (Saudi Aramco) took the 3 Spot.

India’s men’s badminton team wins the Thomas Cup title for the first time ever with a stunning 3-0 win over powerhouse Indonesia in the final. India took on 14-time winners Indonesia in the final of the Thomas Cup in Bangkok, Thailand, and lifted the title by defeating the defending champions by 3-0. India dished out a performance for the ages with World Championships medallist Lakshya Sen, Kidambi Srikanth, and the world number 8 doubles duo of Chirag Shetty and Satwiksairaj Rankireddy producing memorable performances.

Department of Telecommunications has launched the GatiShakti Sanchar portal, which would streamline the application and approval procedure for the right of way (RoW) pan India.

At Satish Dhawan Space Centre (SDSC) in Sriharikota, Andhra Pradesh, the Indian Space Research Organisation (ISRO) successfully completed the static test of a human-rated solid rocket booster (HS200) for the Gaganyaan program.
According to the Bengaluru-based space agency, the HS200 is the human-rated version of the S200 rocket booster of the satellite launch vehicle GSLV Mk III, also known as LVM3.

Union Minister for Environment, Forest, and Climate Change Shri Bhupender Yadav arrived in Abidjan, Cote D Ivoire, for the UN Convention on Combating Desertification’s 15th Conference of Parties (UNCCD COP15). The fourteenth session of the Conference of Parties to the United Nations Convention to Combat Desertification was held in New Delhi, India is the organization’s current president.

Food-delivery app available online Swiggy has agreed to buy restaurant technology and dining out platform Dineout from Times Internet in a formal deal.