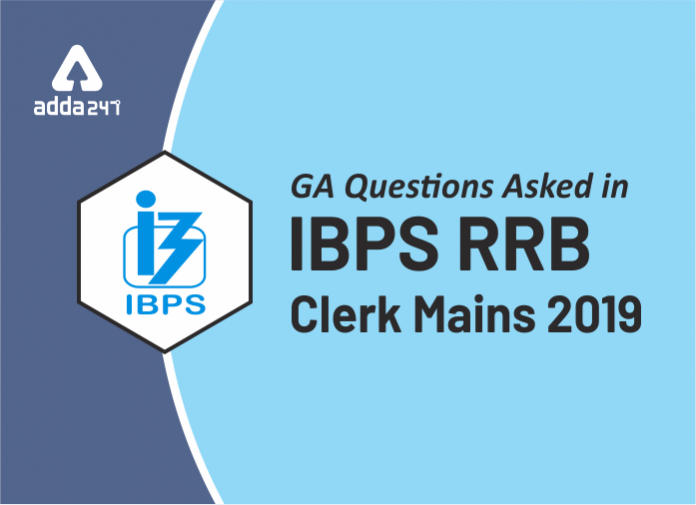 IBPS RRB Clerk mains 2019 is over now. Candidates who have attempted the IBPS RRB Clerk mains exam must be curious to know their performance in the examination. IBPS RRB Clerk Mains Exam Analysis has been given by Bankersadda and as eper our analysis, level of questions asked were moderate. Here, Bankersadda has come up with the General Awareness (GA) question with answers to help you deal with your performance analysis. These questions will help in your score analysis as well as it will also help in preparing for GA sections in further competitive exam

General awareness carries 40 question, each carries 1 mark. This means, general awareness has 40/200 weightage in the mains stage of IBPS RRB Clerk exam. Read the questions asked in the examination with solution below:

Q1. Where is the headquarter of Think-Tank Atlantic Council?
Answer: Washington

Q3. Who is the minister of Information and Broadcasting Ministry?
Answer: Prakash Javadekar

Q4. Who is the winner of men’s Wimbledon 2019?
Answer: Novak Djokovic (Serbia)

Q5. What is the full form of MCLR?
Answer: Marginal Cost of Funds based Lending Rate

Q10. Who is the present Chairman of SEBI?
Answer: Ajay Tyagi

Q11. One question was related to a person who did not get Padma Vibhushan.

Q12. “Operation Sunrise” is conducted between India and which country?
Answer: Myanmar

Q15. Who is honored with Guinea’s highest award in 2019?
Answer: Ram Nath Kovind

Q17. Which firm has signed a Memorandum of Understanding (MoU) with Airbus cabin and cargo design engineering?
Answer: Tech Mahindra

Q18. Which state has the case of the Acute Encephalitis outbreak recently that took away many lives?
Answer: Bihar

Q19. Hemis festival is celebrated in which region of India?
Answer: Leh-Ladakh region

Q24. Where will be NASA’s Dragonfly mission launched in search of the building blocks of life?
Answer: Saturn’s largest moon Titan

Q26. “Relentless” is the autobiography of which personality?Answer: Yashwant Sinha

Q30. ________ is an Indian folk dance originating from the “Konkan” region which is the costal region of the states of Goa and Maharashtra.
Answer: Fugdi

Q33. TRC Turf Ground is a football ground in-
Answer: Jammu and Kashmir

Q35. Careem to become a wholly-owned subsidiary of ___________, operating as an independent company under the Careem brand and led by Careem founders.
Answer: Uber

Q37. Name the woman, who created history by becoming the first woman pilot to cross both Atlantic Ocean and Pacific Ocean solo in a Light Sports Aircraft.
Answer: Aarohi Pandit

Q38. India’s rank has slipped five places to 141 among 163 countries on the Global Peace Index 2019. _______________ think tank Institute for Economics & Peace ranks countries according to their level of peacefulness based on three thematic domains.
Answer: Australian

Q39. Makers of chips, soups, biscuits, juices and other packaged foods will soon have to display ________ colour coding on the front of packets of products that have high levels of fat, sugar or salt.
Answer: Red