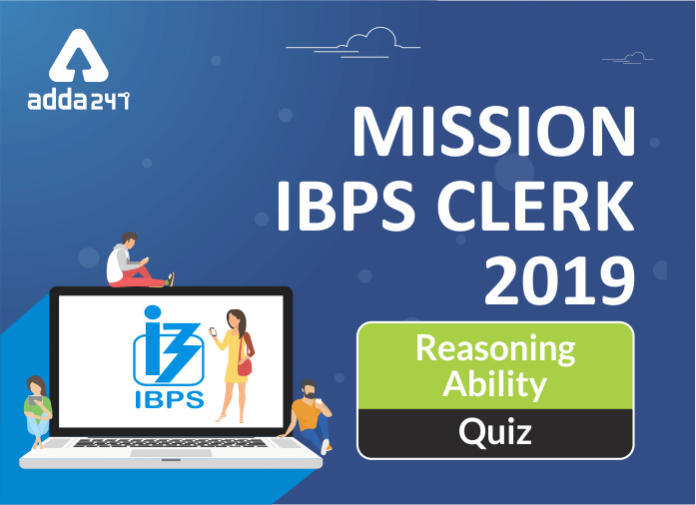 The reasoning being the scoring part can enhance your performance as a whole. All you need to do is clear your basics and be aware of the syllabus of the particular exam you are preparing for. Giving mocks and Quizzes on a regular basis will help you to decode the strategy. Also, the Study Plans go hand in hand with the exam preparations that will take place in the upcoming months. Like the IBPS Clerk Prelims are scheduled in the month of December and we already rolled the study plan for IBPS Clerk. Under the same plan, here is the Quiz for Reasoning, to make sure that you don’t skip any important topic as well as be prepared to face any type of questions in the prelims. IBPS Clerk Reasoning Quiz of 25th October 2019 covers  Miscellaneous Topic.

Direction (1-5): Study the following information carefully and answer the questions given below-
Eight persons P, Q, R, S, T, U, V, W go for a vacation in different months of a year viz . March, April, May, June, July, August, September, October. S goes in a month which has 31 days. Three persons go for vacation in between R and S. P goes for a vacation immediately before T but not in a month which has 31 days. Only two persons go for vacation in between W and Q. T goes in a month before S. Only one person goes in between U and V. W goes before S. U does not go after Q.

Directions (6-10): Study the following arrangement to answer the given questions

Q8. How many such numbers are there in the above arrangement, each of which is immediately preceded by a vowel and immediately followed by a consonant?
(a) One
(b) Two
(c) Three.
(d) More than four
(e) None