Q4. Which of the following statement is true about Q?
(a) S is an immediate neighbor of Q
(b) W faces opposite direction to Q
(c) Only two persons are sitting between Q and R
(d) U sits third to the left of Q
(e) None of these

Q9. If in the number 683297514, all digits are arranged in increasing order from right to left than how many digits remain the same place in the new arrangement?
(a) Three
(b) Four
(c) none
(d) Two
(e) One 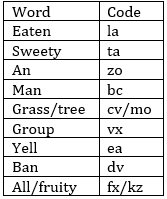