As we all know,  the Institute of banking personnel selection and the state bank of India have announced the recruitment notification for the recruitment of probationary officers in the various branches across India. It is one of the Golden opportunities for all the candidates who are preparing and aiming for the banking sector. As the recruitment for both IBPS PO and SBI PO is announced at the same time, and with increasing competition, one question arises in the mind of every aspirant preparing for the banking examination: Is SBI PO difficult than IBPS PO? Well, the answer to this question is not simple, the answer to this question depends upon various factors discussed in the article below.

Today, the Banking Sector is said to be the most leading job in the country. Bank Po job is the most prestigious job because of its salary and high perks, being the SBI PO or IBPS PO. Qualifying the IBPS PO and SBI PO is not an easy task. Every year lakhs of candidates apply for the recruitment posts released by the various banks. As we all are well aware of the fact that the competition is increasing rapidly. So, the students who are preparing for the examination should prepare well for the examination.

So, the difficulty level of the SBI PO and IBPS PO depends upon the two factors:

State Bank Of India offers the best package amongst all the public and private sector banking institutions. It is a dream of many students to work with SBI because of its high perks and good salary. The number of candidates appearing in SBI PO is more than the number of candidates who appear for the IBPS PO.

We cannot define the difficulty level of the question accurately, because every student has their own ability to perform and give the examination. Comparing the difficulty level of both the exams is a hefty task. But based on the analysis by the experts and exam reviews given by the students who appear in the examination, it can be said that the SBI PO is quite tougher than the IBPS PO. And the number of seats released by the SBI PO is less than the seats released by the IBPS PO. 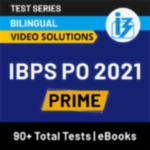 Talking about the opportunities, while you appear for the SBI PO examination, then the only option for you is to get placed in the SBI. Whereas for the other 23 banks in the public sector of India, the exams are conducted through IBPS PO. Thus, the aspirants can prepare for IBPS PO.

Simultaneously, the perks offered by SBI PO are more as compared to IBPS PO which includes a higher salary package. It is also said that a candidate who has cracked the SBI PO finds IBPS PO comparatively easier in several aspects including the difficulty level of questions asked.

The career growth for SBI PO and IBPS PO is almost similar.