The Ministry of Home Affairs has issued an order to further extend the nationwide lockdown for 2 weeks beyond 4 May, under the Disaster Management Act, 2005. The ministry has also issued new guidlines to regulate different activities in the red, orange and green zone districts, where they have permitted considerable relaxations in the Green and Orange zone districts.

The count of COVID-19 infection has climbed up to 35,447 on 1 May and is increasing day by day with the number of active cases being 24,943 in the nation. The further extension in the lockdown was expected as many states West Bengal, Andhra Pradesh, Goa, Himachal Pradesh, Meghalaya, Mizoram etc were in favour of extending the lockdown for the safety of people in the country. This decision by the Ministry of Home Affairs was taken based on risk-profiling of various districts across the country. The lockdown 3.0 comes with new economic guidlines to regulate the econimic activities that is given below.

Press Release on extension of lockdown and issue of new guidelines 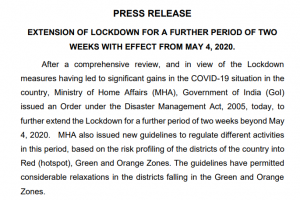 Which Districts will fall in Green Zone?

As stated in the guidlines by the Ministry, “The Green Zones will be districts with either zero confirmed cases till date; or, no confirmed case in the last 21 days. ”

Which Districts will fall in the Red Zone?

The classification of districts as Red Zones will take into account the total number of active cases, doubling rate of confirmed cases, extent of testing and surveillance feedback from the districts. Reports state that the states Uttar Pradesh and Maharashtra have the highest number of red zones at 19 and 14 respectively, followed by Tamil Nadu at 12 and all of Delhi’s 11 districts marked as red zones.

Summary of Guidlines by MHA on Lockdown 3.0.

Interstate Travelling is Banned- Interstate travel by train, air, metro any kind of inter-state movement is not allowed.

No School, Colleges or Public Gathering- running of schools, colleges, and other educational and training/ coaching institutions is prohibitted.

No Non-Essential movement between 7 pm to 7 am- so only go out if you have an essential task with proper safety measures.

Some Movement Allowed in Red Zone- a maximum of 2 persons (besides the driver) in four-wheeler vehicles, and with no pillion rider in the case of two-wheelers.

Stanalone shops are allowed, malls to remain closed- Shops in urban areas, for non-essential goods, are not allowed in malls, markets and market complexes. However, all  standalone (single) shops, neighborhood (colony) shops and shops in residential complexes are permitted to remain open in urban areas, without any distinction of essential and non-essential.

Most of the commercial and private establishments allowed in the Red Zones- print and electronic media, IT and IT enabled services, data and call centres, cold storage and warehousing services, private security and facility management services, and services provided by self-employed persons, except for barbers