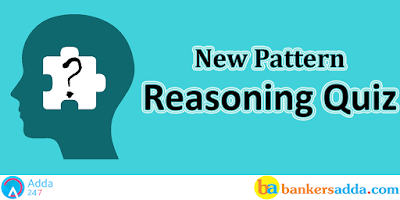 The more you practice, the better you get. So, to let you practice and ace the score in the Reasoning Section of all the Banking Examinations, Bankersdda is proving you with Reasoning Questions and Answers on various topics. Try to attempt these question yourself to score in upcoming IBPS RRB PO Mains, IBPS RRB Clerk, IBPS Clerk, other banking and insurance exams.
Directions (1-5): Study the following information carefully and answer the questions given below:
Six packets L, M, N, O, P and Q are kept in cars of different colours viz. green, red, blue, white, pink and violet but not necessarily in the same order. These cars are parked from left to right facing towards north direction but not necessarily in the same order.

Packet M is kept in white car. Packet L is not kept in green car and is kept to the immediate left of the violet car. Packet O is kept in the blue car and is kept exactly between the cars containing packets L and M. The red car is at the extreme left end. The cars containing packet Q is not kept at either of the ends. The green car is kept at the extreme right end. Packet P is not kept near the white car.
Q1. Four of the following five are alike in a certain way based on their positions in the above arrangement and so form a group. Which is the one that does not belong to the group?
(a) LM
(b) LP
(c) QO
(d) LQ
(e) NO
Q2. Which colour car contains packet L?
(a) Pink
(b) Blue
(c) Red
(d) Can’t be determined
(e) None of these
Q3. Which of the following combinations of packet and car is correct?
(a) P – Red
(b) N – Green
(c) P – Green
(d) Q – Pink
(e) None of these
Q4. Which car contains packet Q?
(a) Pink
(b) Green
(c) Violet
(d) Can’t be determined
(e) None of these
Q5. If all the six packets are arranged alphabetically from left to right, positions of how many will remain unchanged?
(a) None
(b) One
(c) Two
(d) Three
(e) Four
Directions (6-7): In these questions, relationship between different elements is shown in the statements. These statements are followed by two conclusion.
Given answer
(a) If only conclusion I follows.
(b) If only conclusion II follows.
(c) If either conclusion I or II follows.
(d) If neither conclusion I nor II follows.
(e) If both conclusions I and II follow.
Q6. Statements: V ≥ K > M = N; M > S; T < K
Conclusions:
I. T < N
II. V = S