Directions (1-5): Read the following information carefully and answer the given questions.
Eight persons are sitting around a square table in such a way that four of them sit at four corners facing towards center, and rest four who sits at the middle of the side facing outside. All of them was born on different date starting from 21 to 28 of the same month of the same year. They learn different languages.
S sits third to the right of V and was born on 22nd. S face inside the center. Only two persons sit between U who learn Russian language and T who face inside the center. U is not an immediate neighbour of S. Q sits at the corner and learn Dutch language. Only two persons sit between Q and the one who was born in an odd numbered date which is greater than 24. The one who learn French is not an immediate neighbour of Q. V neither learn English nor Spanish language. R faces inside the center. The one who was born on 23 learn German and faces center. The one who learn Spanish was born on 25. The youngest person learn Hindi and P is not the second youngest person. P sits second to the left of W who learn French. The one who learn Swedish language sits second to the right of the one who learn English language. Q was born on the date which is an odd number. Neither R nor P learn English language. T is 2 days older than U. V is the youngest person.

Q1. Who among the following person sits immediate right of R?
(a) P
(b)the one who learn French
(c) Q
(d)the one who was born on 28th of the month
(e) None of these

Q10.What is the direction of point E with respect to point B?
(a) West
(b)North
(c)South-east
(d)North-west
(e)None of these

Q15.Which of the following element is seventh from the right in step II?
(a) gallery
(b) 77
(c) injury
(d) monsoon
(e)None of these 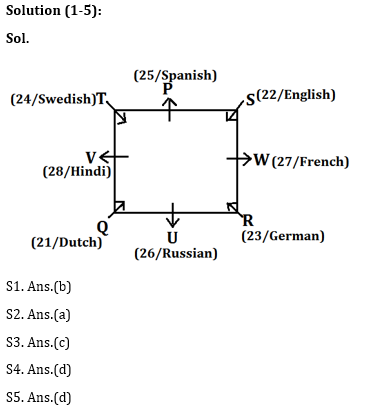