Directions (6-10): Study the information and answer the given questions:
Eight persons P, Q, R, S, T, U, V and W are sitting in row. Some of them facing north and some of them facing south but not necessary in same order. Not more than two adjacent persons face same direction.
V faces north. T sits third to the right of R who sits one of the extreme ends. S sits third to the right of T. P and Q faces same direction. The persons who are sitting at extreme ends face opposite direction to each other’s. Q sits immediate left of W. One person sit between P and W. P sits left of T. U sits left of S. U is not immediate neighbor of R. V face opposite direction to Q.

Directions (11-15): Study the information carefully and answer the questions given below.
Eight persons P, Q, R, S, T, U, V and W are sitting around a rectangular table in such a way that two persons sit on each side of the table. Some of them are facing towards the center while some of them are facing away from the center. Not more than two persons sitting together face same direction.
T sits second to the right of P. W sits second to the left of R and W is not an immediate neighbor of P. R faces T. S sits fourth to the right of W. V sits second to the right of U. W and V do not sit on the same side of the table. R sits to the immediate right of V. W faces opposite direction of S, who face inside.

Q14. Which of the following statement is true about T?
(a) T faces outside
(b) Two persons sit between T and S, when counted right of T
(c) R sits immediate left of T
(d) T is immediate right of W
(e) None is true 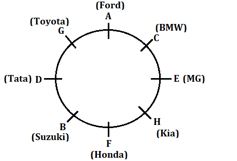 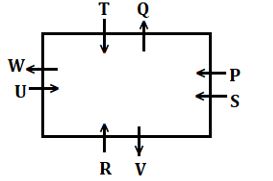