Directions (1-5): Study the following information carefully and answer the given questions.
Eight people sit in a row and some of them face towards north direction and some of them face towards south direction. Not more than two people sit together who face same direction. C sits second to the left of M who sits at the extreme end. Two people sit between C and V. S sits to the immediate right of V who faces towards south direction. A neither sits at the extreme end nor adjacent to C. Q sits to the immediate left of A. More than two people sit between T and Z. T is not an immediate neighbor of S. C and Z face same direction as M.

Q5. Which among the following statements is true?
(a) Z sits second to the left of S
(b) Two persons sit between S and C
(c) The persons sit at the extreme ends face same direction
(d) No one sits to the right of Z
(e) None is true

Directions (6-10): A number arrangement machine when given an input line of numbers rearranges them following a particular rule in each step. The following is an illustration of input and rearrangement.

Q9. If all the numbers in the step IV are arranged in ascending order from left to right, then how many numbers are not changed from its previous position?
(a) One
(b) Two
(c) Three
(d) None
(e) More than Three

Directions (11-15): Study the information carefully and answer the following questions.
Eight people i.e. A, B, C, D, E, F, G and H sit in a square shaped table. Four people sit at the four corners of the table and face outside the table. Four people sit at the middle of the four sides and face inside the table. Two people sit between A and D who sits at the corner. C sits second to the right of D. Only one person sits between C and H. G sits adjacent to H. B sits second to the right of E. F does not sit adjacent to A. 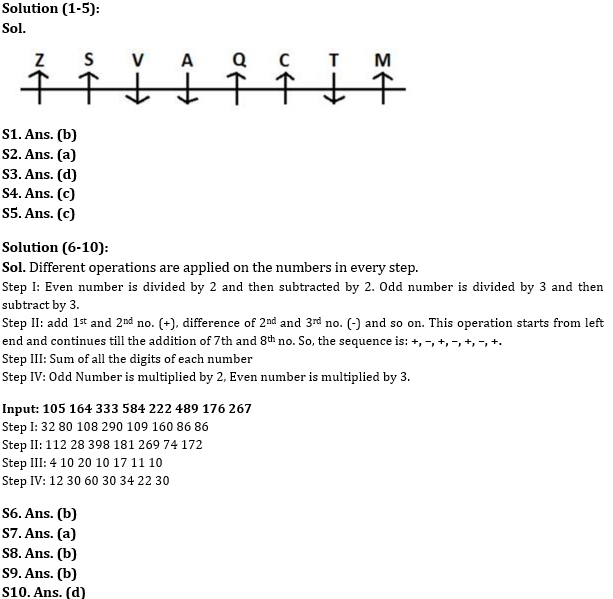 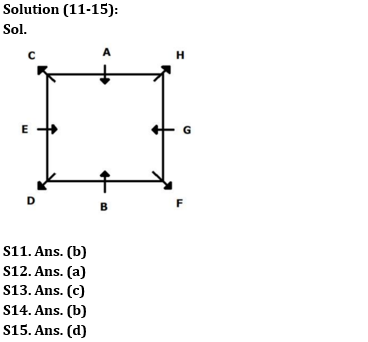