Q3. How many persons are sitting in between O and the one who sits immediate right of the one who likes Skechers, when counted left of O?
(a) One
(b) Two
(c) Four
(d) Three
(e) None

Directions (6-10): Study the following information carefully and answer the questions given below:
Six Horse i.e. P, Q, R, S, T and U are standing in a row facing north at a distance which is a successive multiple of 6 in an increasing order from the left to right.
Horse S is standing second from one of the extreme end. Only two horses stand between the S and T. Two horses stand between R and P who does not stand adjacent to S. U stands right of Q, who does not stand next to P. Neither R nor S is not an immediate neighbour of Q. Total distance between the horse P and Horse S is 54. Now, horse U is moving towards North direction and after going 10m, it turns to right and goes 15m to reach at point Y. Horse R is moving towards South direction and after going 15m it takes right turn and goes 51m to reach at point Z.

Q7. In which direction point Y is with respect to point Z?
(a) North
(b) North west
(c) North east
(d) South west
(e) None of these 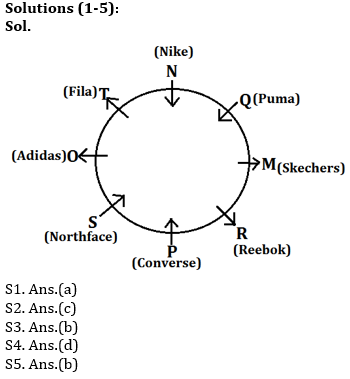 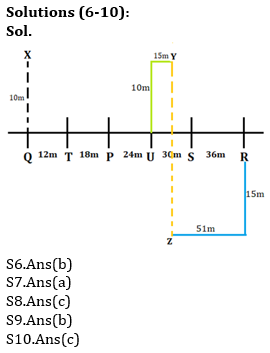