Directions (1-5): Study the following information carefully to answer the given questions.
Nine persons A, B, C, D, E, F, G, H and I stay on a nine-floor building, but not necessarily in the same order. The bottommost floor is numbered as first floor, the floor above is numbered as second and so on till the topmost floor which is numbered as ninth. Only one person stays on each floor. Each of them was born in the different months of the same year starting from January to September but not necessarily in the same order. Each of them was born either in city Y or city X. Only five of them were born in city X. The one who was born in the month of June in city Y stays on third floor. There are two floors between the floors on which the persons born in February and March lives. C was born in April in city Y. A stays on an even numbered floor, below the even numbered floor on which H stays. The one who lives on fourth floor is the youngest and was born in city X. D who stays on the second floor was born in the month of May in city X. There is only one floor between the floors on which F and G stay. B who is the oldest person stays on the topmost floor. A was not born in the month of July and was not born in city X. E stays immediate above the floor on which I stay. F was born in the month of march in city Y and stays on an odd numbered floor. G does not stay on the ground floor. B stays immediately above the floor on which H stay. There are three floors between the floors on which C and F stay. The second oldest person stays immediate above G.E stays on the fourth floor. B lives in city X.

Q1. The person who lives on the floor which is immediately above A’s floor was born in which of the following months?
(a) April
(b) July
(c) May
(d) February
(e) August 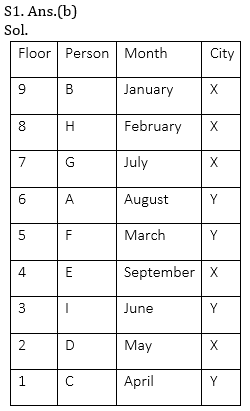 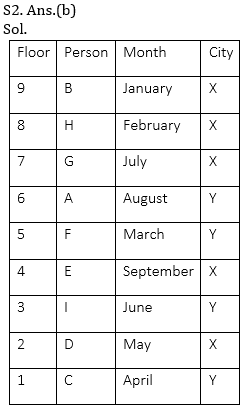 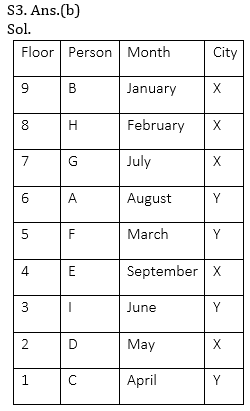 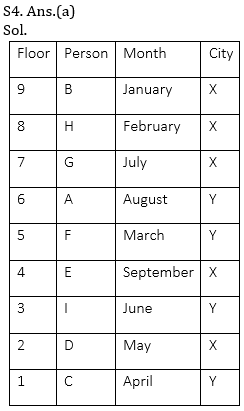 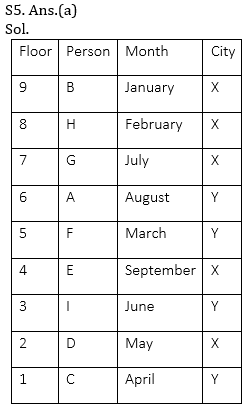 Solutions (6-10):
Sol. The codes are obtained by multiplying the positional value of the last letter of the word with the number of letters in the word. Example – Some is coded as (4, 20).