Directions (1-5): Study the following information carefully and answer the given questions.
Eight persons are sitting around a rectangular table some are facing centre while rest are facing outside the centre. Two persons sit on each side of the table. The persons sit on each side sit exact opposite to the persons who sit on other side of table, no person sits on the corner of the table. The ones who like Cities face centre while the one who like colour face outside.
D likes pink and sits second to the right of E, who does not like colour. C is not an immediate neighbour of E and doesn’t sit opposite to E. The one who likes grey sits Second to the left of C. The one who likes grey is not an immediate neighbour of D. E doesn’t like grey. C doesn’t like colour. Immediate neighbours of C face same direction. B likes Pune and the one who likes Goa sits third to the right of B. A likes red and is not an immediate neighbour of D. No two persons can sit together according to alphabetical order (e.g. A can’t sit with B and B can’t sit with C and so on). Not more than two persons who sit together face same direction. B sits immediate left of D. F does not like city. The one who likes yellow sits second right of A. G likes blue. H sits third left of the one who likes Delhi. C and A does not sit on same side.

Q5. Which of the following statement is true about B?
(a) B faces outside
(b) B likes colour
(c) B sits third to the right of E
(d) H is an immediate neighbour of B
(e) None is true

Directions (6-8): Study the following information carefully and answer the questions given below.
One morning Love and Kush start their journey from the same point in the opposite direction. Love walks for 6km and then take a right turn and walk for 4km then he again takes a left turn to walk 4km towards east and stopped at this point. While Kush walk for 5km and take a right turn then after walking 3km he takes a right turn and again walk for 2km. He then turned left and walked 1km and stopped at this point.

Q8. What is the direction of Kush’s final point with respect to Love’s final point?
(a) North
(b) South
(c) North-west
(d) North-east
(e) South-west

Directions (9-10): Study the given information and answer the following question.
A person starts walking in north direction from point X, after walking 5m he reached at point A, then he takes left turn and walks some distance to reach at point Y. After that he walks in north-east direction and walks 13m to reach at point M. Point N is 5m west of point Y. Distance between point M and Y is same as the distance between Point Y and X. Point X is south of M. 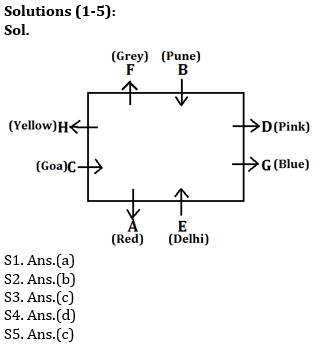 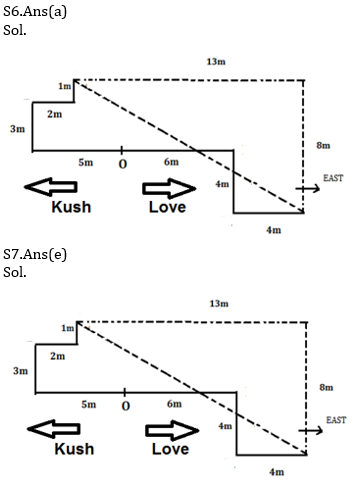 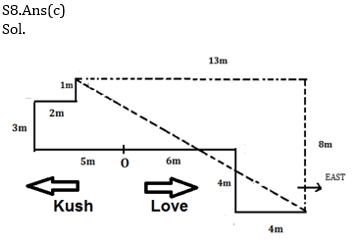 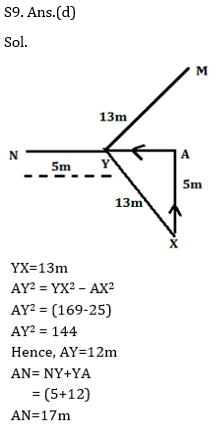 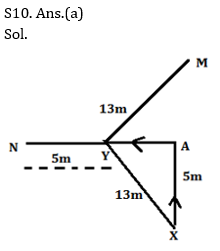