Q1. Who among the following person going to the exam on Thursday?
(a) The one who goes just before F
(b) The tallest person
(c)A
(d)C
(e)None of these

Directions (11-13): Study the information carefully and answer the questions given below.
Q is the wife of P. P is the grandfather of R. Q has only one child(son) who is married to T’s child. T has only two children one son and one daughter. X is grandson of T. S is brother in law of son of T. U and V are children of T. W is married to the son of T. X is nephew of U and he is W’s child. Only consider given persons.

Q14. If all the letters in the word ‘COUNTRY’ are arranged in alphabetical order from left to right in such a way that vowels are arranged first followed by consonants, then how many letters are there in between U and T after the arrangement?
(a) Two
(b) One
(c) None
(d) Three
(e) Four 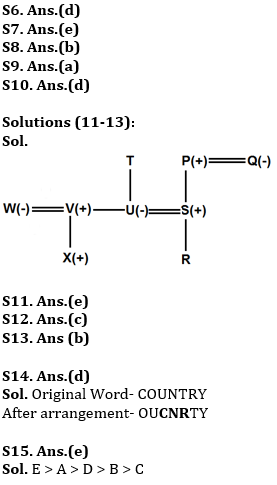