SBI has released SBI Clerk Notification 2020 to recruit 8000+ candidates for the post of Junior Associate. As per the official notification, SBI Prelims Exam is to be held in the month of February and March. We will provide you daily reasoning quizzesand a study plan to enhance your preparation. Today’s quiz based on budget theme.

Q1. In which of the following ministry second-highest amount is allocated?
(a) Defence
(b) Agriculture
(c) Transport
(d) Health
(e) None of these

Q3. In which of the following ministry 60crore amount are allocated?
(a) Telecom
(b) Education
(c) Defence
(d) Transport
(e) None of these

Q5. In which of the following ministry lowest amount is allocated?
(a) Education
(b) Defence
(c) Transport
(d) Agriculture
(e) None of these

Q9. What is the word for the code “me” in the given code language?
(a) government
(b) agriculture
(c) budget
(d) ministry
(e) national

Q11. How many pairs of letters are there in the word “HIGHLIGHT” each of which have as many letters between them (both forward and backward direction) in the word as they have between them in the English alphabetical series?
(a) Four
(b) Five
(c) Three
(d) More than Five
(e) None

Q12. How many meaningful words can be formed using 1st, 3rd, 6th and 8th letters of the word “ECONOMIC” using each letter only once in each word?
(a) One
(b) Two
(c) Three
(d) More than Three
(e) None

Q13. If all the letters in the word “REVOLUTION” are arranged in alphabetical order from left to right in such a way that consonants are arranged first followed by vowels, then how many letters are there in between N and U after the arrangement?
(a) Six
(b) Five
(c) Seven
(d) Three
(e) None 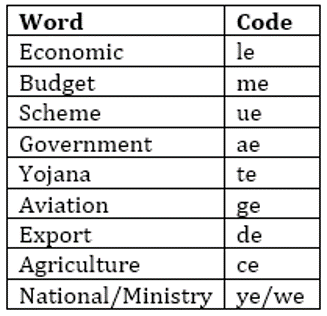