The SBI PO Prelims exam is scheduled to be held from 31st December onwards. To qualify through the prelims exam, candidates have to meet the cut-offs that the State Bank of India releases for each exam. In this article, we will be discussing the trend analysis of the previous year’s cut-offs released by SBI of the SBI PO Exam. Let us first have a look at some important dates of this year’s SBI PO 2020 Exam: 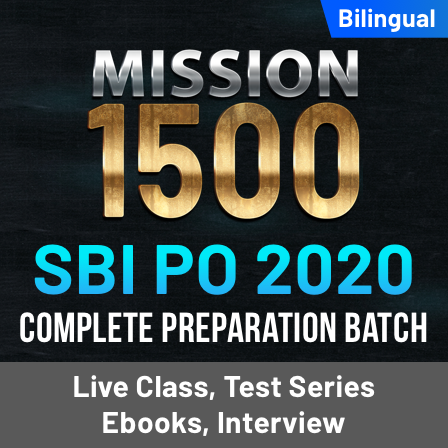 It is important for all the SBI aspirants to know the trend that the State Bank of India follows in its cut-offs in order to have a complete overview of ‘How the cut-offs are released and on what basis’. Cut-off marks also indicate the difficulty level of the question paper and important information about the exam of that particular year. Knowing the trends that SBI follows in its cut-off will enable the candidates to understand the level of preparation that is required. Let us look at the year-wise SBI PO prelims cut-offs and their trend analysis.

Amongst the previous year’s cut-offs that we will be discussing you will find the cut-off of 2019 the highest. This is because of two reasons, the level of difficulty and the number of aspirants appearing for the exam. These two factors are the major influencers of any cut-off list. With the increased number of candidates in the year 2019 and because of the moderate level of difficulty of questions the cut-off in 2019 saw inclination.

Let us now discuss the trend that was followed for SBI PO Prelims Exam 2019:

As compared to the cut-off of 2019, 2018’s Cut-Off for SBI PO Prelims was lenient . Cut-off based on the toughness of the paper and the number of candidates who have attended that exam. From this, it can be analyzed that in 2018 the difficulty of the exam was lenient than 2019’s SBI PO Prelims Exam. It can also be analyzed in the other way, which means that the number of candidates who appeared for the SBI PO Prelims exam in the year 2018 was very much less than those who appeared on the 2019’s Prelims Exam.

Let us now discuss the trend that was followed for SBI PO Prelims Exam 2018:

Let us now discuss the trend that was followed for SBI PO Prelims Exam 2017: