Tomorrow is the day for the announcement of “The Union Budget” for 2018-19, and it is very important for every citizen of the country and especially the aspirants who will be appearing for upcoming competitive exams to carefully understand and analyse the budget. You have to be ready to face any question from the Union Budget in the General Awareness section or in the Interview round of upcoming recruitments. So tomorrow, Be Attentive, Stay Tuned to News Channels or Bankersadda for Important Updates and Analysis of this year’s Union Budget.
But before diving into the facts and figures of the budget, it is important that you should understand What the Union Budget is all about? Many aspirants might be clueless about the basics of the Budget, so here we have provided you with the basic things that you should know about the Union Budget.
Budget is an Annual financial statement of the estimated receipts and expenditure of the Government for the financial year. (1st April –31st March). It is presented by the Union Finance Minister in the parliament. Once passed by both the houses of parliament and approved by the President of India, the Budget comes into effect from 1st April. 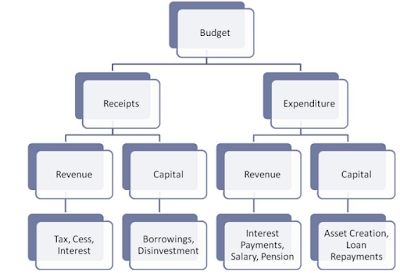 Why do we need Budget?
The Budget is formulated to optimally allocate the Government’s resources to different sectors and schemes, so that the broad objectives of the government could be achieved. It presents government’s proposed revenues and expenditure for the coming financial year. It also determines how adequately the financial and resource management responsibilities have been discharged in the last financial year. Budget is also a means to ensure financial accountability of the Government to the Parliament. There by maintaining legislative prerogative over taxation and expenditure.
How is the Budget Prepared in India?
Budget is prepared by the Budget Division, Department of Economic Affairs, Ministry of Finance.
a) The budget division issues an annual budget circular to all the Union Government ministries/ departments containing guidelines on how to prepare budget estimates.
b) The Ministries/departments prepare and present their estimates for budget allocation.
c) The ministries also provide the estimates for their revenue receipts in the current financial year and next financial year to the finance ministry.
d) The finance minister then examines the proposals received from various ministries and makes necessary changes, if any. The finance minister also consults the prime minister, and briefs the Union Cabinet, about the budget.
e) The budget division then consolidates all the estimates received and prepares the budget documents.
How are the Government receipts categorised in the budget?
Government receipts are the income receipts of the government from all the sources in a particular financial year. These are divided in to two different categories:
a) Revenue receipts: Revenue receipts are those receipts, which neither create liability nor reduce the assets of the Government. These include revenue received from taxes, cess, interest payments, dividend on investments etc. They are generally recurring in nature.
b) Capital Receipts: Capital receipts are those which either create liability or reduce the assets of the Government. These include Government borrowings, disinvestment etc.

What is Outcome Budget?
From the fiscal year 2006-07, every Ministry presents a preliminary Outcome Budget to the Finance Ministry, which is responsible for compiling them. The Outcome Budget is a progress card on what various Ministries and Departments have done with the outlays in the previous annual budget. It measures the development outcomes of all government programs and whether the money has been spent for the purpose it was sanctioned including the outcome of the fund usage. For instance, it will tell a citizen if money allocated for building a primary health centre, has indeed come up. It is a means to develop a linkage between the money spent by a government and the results which follow. It is expected to change the mindsets of government officials to become more result oriented, instead of outlay centric.