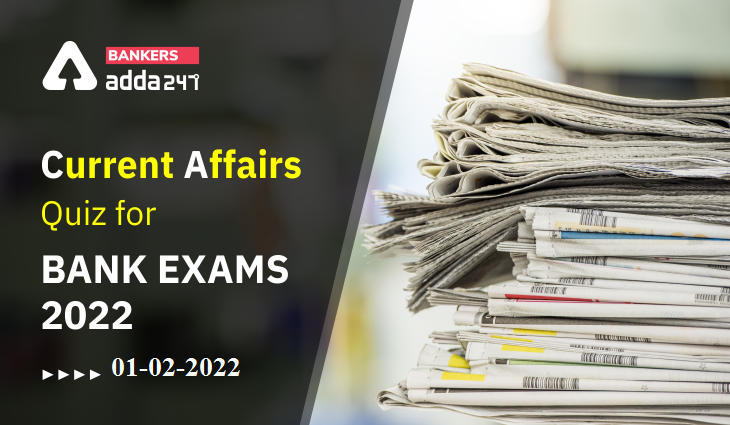 The Current Affairs section constitutes a major part of the General Awareness section in a competitive examination and plays an instrumental role. To supplement your preparation for the General Awareness Section of the upcoming exams like IBPS PO/Clerk Mains, SBI PO Mains and SEBI Grade A Prelims, we are providing you Current Affairs Quiz of 01st February 2022 covering the following topics Headlines: Paytm Money, Villages of Excellence, FICCI, Tata Group, Digital Work Plan 2022 , Australian Open 2022.

Q3. India has collaborated with which country to create 150 ‘Villages of Excellence’ in 12 States of India?
(a) Japan
(b) Germany
(c) Israel
(d) France
(e) Japan

Q4. Security Printing and Minting Corporation of India Limited (SPMCIL) has set up two new bank note printing lines. Where are these two located?
(a) Nashik and Dewas
(b) Salboni and Nashik
(c) Dwas and Mysore
(d) Mysore and Salboni
(e) Mysore and Nashik

Q15. Which state has topped India’s list in the number of MSME owned by entrepreneurs from the Scheduled Castes?
(a) Maharashtra
(b) Tamil Nadu
(c) Rajasthan
(d) Uttar Pradesh
(e) Karnataka

S1. Ans.(d)
Sol. Paytm Money has introduced “India’s first” intelligent messenger called ‘Pops’. The company has launched ‘Pops’, with which users can receive specific information related to their stocks, analysis about their portfolio, market news, and important market movements in an easy to consume format, all in one place.

S3. Ans.(c)
Sol. The Government of India has joined hands with the Government of Israel to create 150 ‘Villages of Excellence’ in 12 States of the country, to help farmers to adopt latest technology in the farm sector.

S15. Ans.(a)
Sol. Maharashtra has topped India’s list in the number of micro, small and medium enterprises (MSME) owned by entrepreneurs from the Scheduled Castes with as many as 96,805 enterprises.