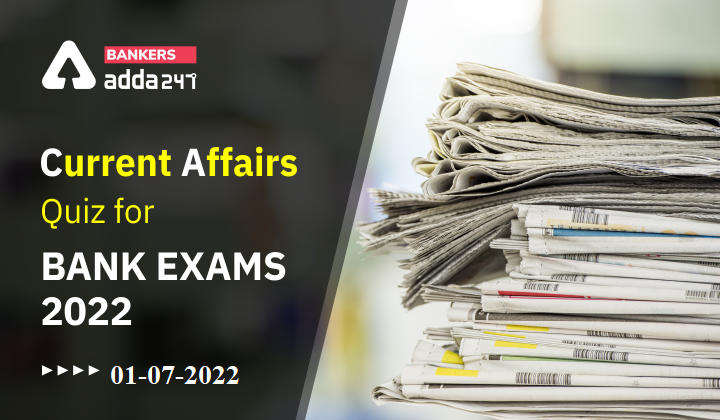 Q9. What is the name of the e-learning portal of the Department of Posts launched recently?
(a) Dak Mitra
(b) Dak Sevak
(c) Dak Shikshak
(d) Dak Karmayogi
(e) Dak Mandal

Q11. An automated Pay & Allowances module for the Indian Coast Guard was inaugurated by Rajnish Kumar recently. It is called ________.
(a) DAPAM
(b) ICGPAD
(c) MAICG
(d) PADMA
(e) DAAPM

Q12. Novak Djokovic became the first player in history to win 80 matches in all four Grand Slams recently. He achieved this feat when he defeated _____ for his 80th win in Wimbledon.
(a) Stefan Kozlov
(b) Dennis Novak
(c) Andy Murray
(d) James Duckworth
(e) Kwon Soon-woo

S2. Ans.(e)
Sol. Uddhav Thackeray has resigned as the Chief minister of Maharashtra. This comes immediately after the Supreme Court refused to stay Maharashtra Governor’s direction to the Uddhav Thackeray-led Maha Vikas Aghadi (MVA) government to take a floor test in the Assembly.

S3. Ans.(a)
Sol. June 30 is observed as the International Day of Parliamentarism every year to commemorate the date on which the Inter-Parliamentary Union (IPU) was founded.

S5. Ans.(c)
Sol. The United Kingdom government has announced a partnership with leading businesses in India to offer 75 fully funded scholarships for Indian students to study in the UK from September, in celebration of the 75th anniversary of India’s independence.

S8. Ans.(a)
Sol. Olympic and World Cup medallist Varinder Singh, who was an integral part of some of India’s memorable victories in the 1970s, died in Jalandhar.

S10. Ans.(b)
Sol. World Asteroid Day (also known as International Asteroid Day) is an annual UN-sanctioned global awareness campaign event observed on June 30, which is the anniversary of the Siberian Tunguska event of 1908.

S14. Ans.(d)
Sol. SEBI provided an additional payment option of UPI or unified payments interface mechanism to retail investors to apply in the public issue of REITs and InvITs for application value up to Rs 5 lakh.