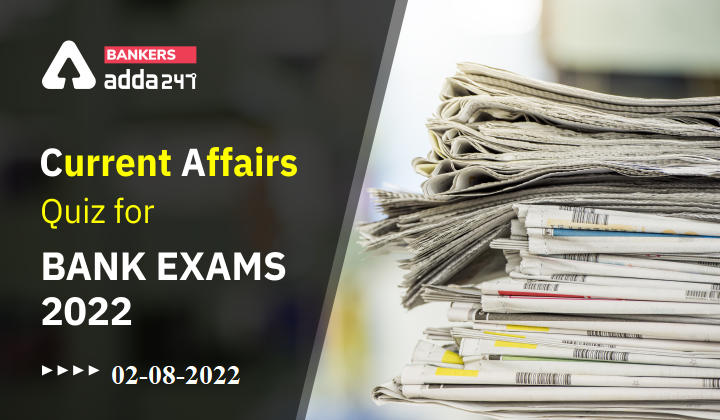 The Current Affairs section constitutes a major part of the General Awareness section in a competitive examination and plays an instrumental role. To supplement your preparation for the General Awareness Section of the upcoming exams like IBPS PO/Clerk Mains, SBI PO Mains and SEBI Grade A Prelims, we are providing you Current Affairs Quiz of 02nd August 2022 covering the following topics Headlines: World Breastfeeding Week 2022, Commonwealth Games 2022, 2022 Hungarian Grand Prix, Ex VINBAX 2022.

Q2. Which of the following country has launched gold coins to tackle the soaring inflation?
(a) Sri Lanka
(b) Ghana
(c) Sudan
(d) Zimbabwe
(e) Oman

Q3. Identify the new slogan for the Olympic and paralympic Games Paris 2024 that was revealed in July 2022.
(a) Held Your Hope High
(b) Games Wide Open
(c) Faster, Higher, Stronger, Together
(d) Together for a Shared Future
(e) A new world

Q9. Point 5140 at Dras sector was named as Gun Hill to mark the victory of the Indian Armed Forces during _______.
(a) Operation Meghdoot
(b) Operation Bluestar
(c) Operation Vijay
(d) Operation Good will
(e) Operation Cactus

Q10. Which of the following state has recently topped in holding Assembly sittings in 2021?
(a) Uttar Pradesh
(b) West Bengal
(c) Rajasthan
(d) Kerala
(e) Maharashtra

S5. Ans.(d)
Sol. This year’s World Breastfeeding Week, under its theme ‘Step Up for Breastfeeding: Educate and Support.’

S10. Ans.(d)
Sol. Kerala, which slipped to the eighth slot in holding the sittings of the State Assembly during the first wave of the COVID-19 pandemic in 2020, got back to the first place in 2021, with its House sitting for 61 days, the highest for any State.