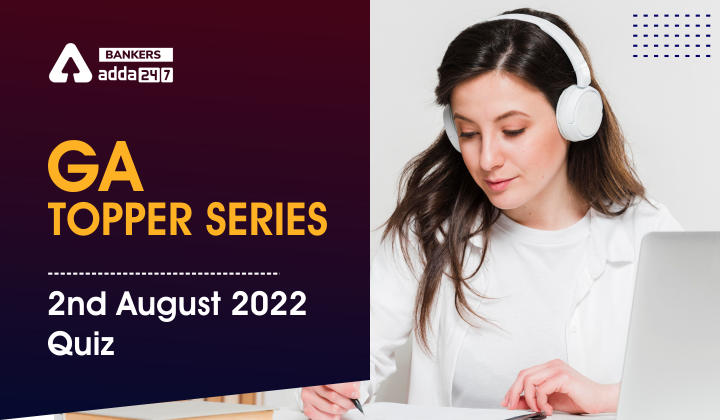 GA Topper Series: 2nd August 2022: Hello Students, General Awareness is an essential part of all government exams. It’s better to prepare this section daily and revise the same using the factsheet provided. Bankersadda team has brought you up a new series in which we will come up with 10 questions and answers, other options of the question have related news to them. So don’t miss reading the solutions.

Q1. ‘AL NAJAH-IV’ is a joint military exercise between India and which country?

Q5. Which country has launched gold coins to be sold to the public in a bid to tame runaway inflation?

Q7. How many bilateral Air Service Agreement are signed by India?

Q9. India has 52 tiger resrves but it covers how much area in sq.km?

Savitri Jindal, the Chairperson Emeritus of OP Jindal Group, has surpassed China’s Yang Huiyan to become Asia’s richest woman, as per the real-time Bloomberg Billionaires Index. The 72-year-old Savitri Jindal who also holds the position of the richest woman in India has a total fortune of $11.3 billion.

The Prime Minister, Shri Narendra Modi has congratulated Indian U-17 contingent for their excellent performances at Cadet (U-17) World Wrestling Championship in Rome, Italy.

“With 14 medals including 7 Golds (of which 5 were won by women athletes) and a Gold in Greco Roman after 32 years, India’s performance at the Cadet (U-17) World Wrestling Championship has been the best ever. India has also topped the medals tally.

The organizers of the 2024 Paris Olympics unveiled “Games Wide Open” as their official slogan. The 2024 Summer Olympics are scheduled to take place from July 26 to August 11, 2024. The slogan was released alongside a video promising the Olympics and Paralympics would be “faster”, “higher” and “stronger” — as well as “more inclusive, more brotherly, more beautiful.”

Zimbabwe has launched gold coins to be sold to the public in a bid to tame runaway inflation that has further eroded the country’s unstable currency.

Any designated foreign airline can operate to/from a point in India if it is designated as a point of call in the bilateral Air Services Agreement (ASA) signed between India and the country which has designated the airline. India has signed ASAs with 116 foreign countries

India has 52 tiger reserves covering over 75,000 sq. km. Innovative measures are being undertaken to involve local communities in tiger protection.