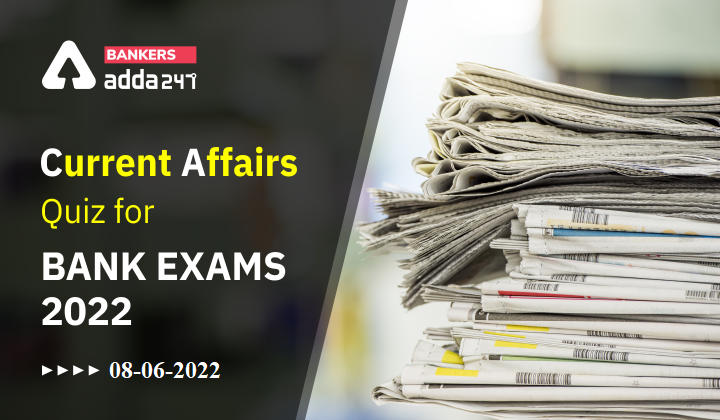 The Current Affairs section constitutes a major part of the General Awareness section in a competitive examination and plays an instrumental role. To supplement your preparation for the General Awareness Section of the upcoming exams like IBPS PO/Clerk Mains, SBI PO Mains and SEBI Grade A Prelims, we are providing you Current Affairs Quiz of 08th June 2022 covering the following topics Headlines: THE Asia University Rankings 2022, IIFA 2022, World Food Safety Day, Kiyaverse, Bloomberg Billionaires Index.

Q9. The world’s first population estimation of which of the following species was revealed to be 176 by the Chilika Development Authority (CDA), recently ?
(a) Fishing Cats
(b) Crocodile
(c) Olive Ridley Turtle
(d) Indian Dolphin
(e) Bengal Tiger

Q12. According to the latest Bloomberg Billionaires Index, who is the richest in Asia?
(a) Zhong Shanshan
(b) Mukesh Ambani
(c) Gautam Adani
(d) Zhang Yiming
(e) Ma Huateng

Q14. Which of the following state is set to introduce the Rajiv Gandhi Khel Ratna Award to the State’s sportspersons?
(a) Rajasthan
(b) Uttar Pradesh
(c) Uttarakhand
(d) Punjab
(e) Haryana

S1. Ans.(a)
Sol. The Indian Institute of Science (IISc) continued to be the best institute of the country. It ranked at 42nd place.

S5. Ans.(e)
Sol. World Food Safety Day is celebrated globally on June 7 every year as per the World Health Organization (WHO).

S8. Ans.(e)
Sol. India’s digital payments market is expected to increase more than threefold from the current three trillion dollars to $10 trillion by 2026, as per the latest report by PhonePe.