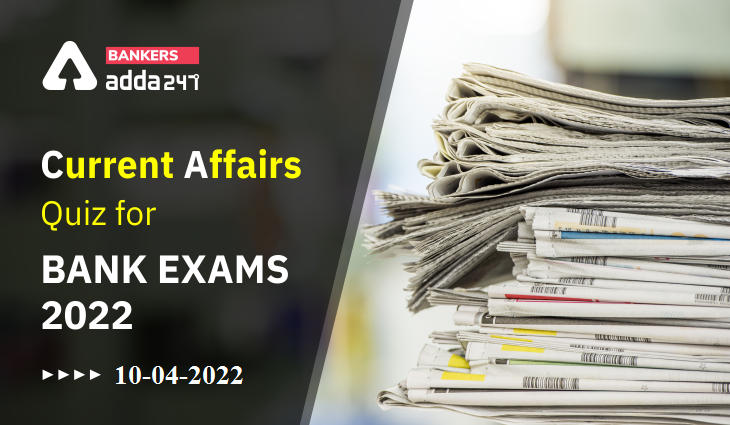 The Current Affairs section constitutes a major part of the General Awareness section in a competitive examination and plays an instrumental role. To supplement your preparation for the General Awareness Section of the upcoming exams like IBPS PO/Clerk Mains, SBI PO Mains and SEBI Grade A Prelims, we are providing you Current Affairs Quiz of 10th April 2022 covering the following topics Headlines: CRPF Valour Day, International Booker Prize, PM Mudra Yojana, World Press Photo of the Year 2022, Infosys and Rolls-Royce.

Q3. Which of the following novel has become the first Hindi language work of fiction to be shortlisted for the prestigious International Booker Prize?
(a) A New Name: Septology VI-VII
(b) Heaven
(c) Tomb of Sand
(d) Elena Knows
(e) The Books of Jacob

Q4. The Airport Authority of India (AAI) has launched an initiative “AVSAR” to encourage the talent of women, artisans and craftsmen and provide them with the right opportunities. Who is the present chairman of Airports Authority of India?
(a) Sanjeev Kumar
(b) Vikram Dutta
(c) Jyoti Sharma
(d) Arvind Singh
(e) Vijay Singh

Q5. Name the author of the book ‘Not Just A Nightwatchman: My Innings with BCCI’.
(a) Ashish Singh
(b) Shubham Arora
(c) Soniya Verma
(d) Vinod Rai
(e) Shikhar Mittal

Q8. India’s first case of the XE variant of the coronavirus disease (Covid-19) was reported in Mumbai. Which of the following SARS-CoV-2 variant is formed as a subvariant in ‘ XE’ ?
(a) Alpha
(b) Beta
(c) Gamma
(d) Delta
(e) Omicron

S1. Ans.(b)
Sol. The Central Reserve Police Force (CRPF) Valour Day (Shaurya Diwas) is observed on 9 April every year, as a tribute to the brave men of the Force.

S3. Ans.(c)
Sol. In the history of the International Booker Prize, the novel ‘Tomb of Sand’, authored by Geetanjali Shree, has become the first Hindi language work of fiction to be shortlisted for the prestigious literary prize.

S8. Ans.(e)
Sol. New subvariant – ‘XE’ – a hybrid strain of two Omicron sub variants, could be the most transmissible coronavirus strain so far.

S9. Ans.(d)
Sol. Bhima Bhoi :- The 19th century Saint-Poet of Odisha, popularly referred to as Santha Kabi, was an ardent proponent of Mahima Dharma and played a stellar role in rekindling the cultural and literary consciousness in the state.