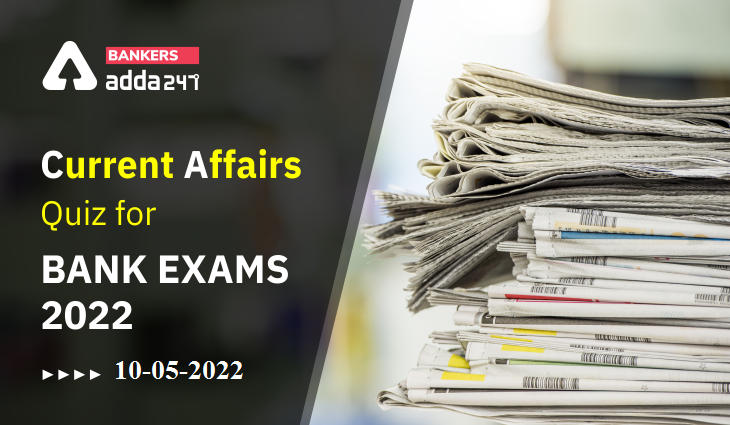 The Current Affairs section constitutes a major part of the General Awareness section in a competitive examination and plays an instrumental role. To supplement your preparation for the General Awareness Section of the upcoming exams like IBPS PO/Clerk Mains, SBI PO Mains and SEBI Grade A Prelims, we are providing you Current Affairs Quiz of 10th May 2022 covering the following topics Headlines: Indian Bank, Supreme Court, Shaili App, Utkarsh Mahotsav, Hindustan Petroleum Corporation Ltd, Adani Wilmar.

Q1. Which state government will launch an App ‘Shaili’, aimed at diagnosing and controlling lifestyle diseases among the people?
(a) Karnataka
(b) Gujarat
(c) Odisha
(d) Kerala
(e) West Bengal

Q3. Which state/UT government has the government announced a Startup Policy to aid the entrepreneur?
(a) Chandigarh
(b) Ladakh
(c) Delhi
(d) Gujarat
(e) Maharashtra

Q5. L&T Infotech has announced a merger with which of the following company, to create India’s fifth-largest IT services provider?
(a) Mphasis
(b) Coforge
(c) Cognizant
(d) Mindtree
(e) Hexaware Technologies

Q8. The Poumai is one of the largest tribes belonging to which state?
(a) Meghalaya
(b) Manipur
(c) Tripura
(d) Assam
(e) Bihar

Q13. What is the theme of World Thalassemia Day 2022?
(a) Thalassaemia past, present and future: Documenting country progress and patients’ needs globally
(b) Universal access to quality thalassaemia healthcare services: Building bridges with and for a patient
(c) The dawning of a new era for thalassaemia
(d) Addressing Health Inequalities Across the Global Thalassaemia Community
(e) Be Aware.Share.Care: Working with the global community as one to improve thalassemia knowledge

S1. Ans.(d)
Sol. The government of Kerala is set to launch an Android App ‘Shaili’, aimed at diagnosing and controlling lifestyle diseases among the people in the state of Kerala.

S3. Ans.(c)
Sol. The Delhi cabinet has approved the “Delhi Startup Policy” with an aim to create an ecosystem for people to launch startups and provide them with fiscal and non-fiscal incentives, collateral-free loans, and free consultancy from experts, lawyers, and CA.

S7. Ans.(b)
Sol. World Thalassemia Day is observed on May 8, every year to create awareness about the ailment and support patients, their families and health care workers with information to combat it.

S8. Ans.(b)
Sol. Poumai tribe, one of the major Naga tribes living in Manipur’s hill district, Senapati have recently declared their villages a no-drugs zone in order to help the state government curb the drugs menace including illegal poppy cultivation.

S9. Ans.(e)
Sol. The sanctioned judge strength of the Supreme Court is 34 (including Chief Justice of India).

S13. Ans.(e)
Sol. The theme for this year’s World Thalassemia day is ‘Be Aware.Share.Care: Working with the global community as one to improve thalassemia knowledge.’

S14. Ans.(b)
Sol. Pushp Kumar Joshi, who recently took over as the interim chairman and managing director of Hindustan Petroleum Corporation Ltd (HPCL), has been appointed on the Board of the nation’s third-largest oil refining and fuel marketing company.