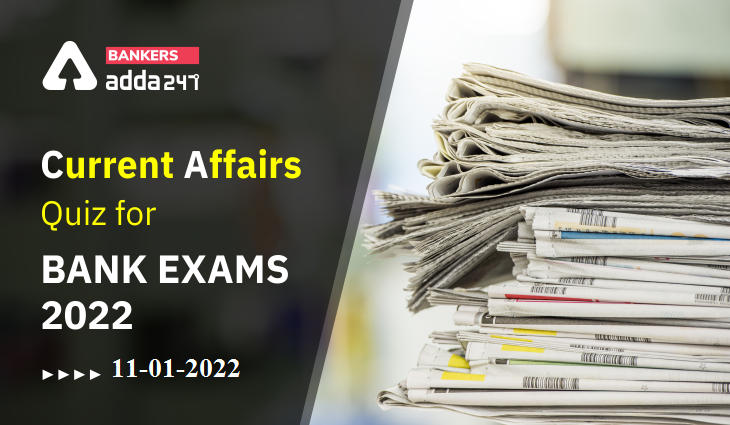 11th December Current Affairs 2022: Here, we are providing the 11th January Current Affairs Quiz. These types of topics are important for candidates who prepare for Bank Exam 2022. In this article, we are covering the following topics Headlines:

The Current Affairs section constitutes a major part of the General Awareness section in a competitive examination and plays an instrumental role. To supplement your preparation for the General Awareness Section of the upcoming exams like IBPS PO/Clerk Mains, SBI PO Mains and SEBI Grade A Prelims, we are providing you Current Affairs Quiz of 11th January 2022 covering the following topics Headlines: SKOCH award, World Hindi Day, Pravasi Bhartiya Divas, Insolvency and Bankruptcy Board of India, Losoong Festival, Airtel Payments Bank.

Q6. Centre has recently extended the tenure of whom as the interim Chairperson of Insolvency and Bankruptcy Board of India (IBBI) till March 05, 2022?
(a) Sudhaker Shukla
(b) Navrang Saini
(c) Mukulita Vijayawargiya
(d) M. S. Sahoo
(e) Mohit Rana

S4. Ans.(a)
Sol. The World Hindi Day is celebrated on January 10 since 2006 to promote the language at the global stage.

S6. Ans.(b)
Sol. The Centre has extended the tenure of Navrang Saini as interim Chairperson of Insolvency and Bankruptcy Board of India (IBBI) for three more months till March 05, 2022.

S7. Ans.(e)
Sol. Prime Minister Shri Narendra Modi has declared that starting from the year 2022, December 26 will be observed as ‘Veer Baal Diwas’ every year.

S8. Ans.(b)
Sol. Losoong (Namsoong) is annually celebrated across the Indian State of Sikkim on the 18th day of the 10th month of the Tibetan Lunar Calendar, which also marks the beginning of the harvest season.

S12. Ans.(e)
Sol. Legends League Cricket (LLC) appointed Jhulan Goswami as an Ambassador to its All Women Match Official Team to promote Women’s Empowerment initiatives of the LLC and to increase participation of women in cricket.

S13. Ans.(b)
Sol. Satish Adiga will receive Dr Subhas Mukherjee Award from ICMR in recognition for his outstanding contribution to the field of in-vitro fertilization (IVF). He has contributed significantly to both clinical IVF and fertility research.