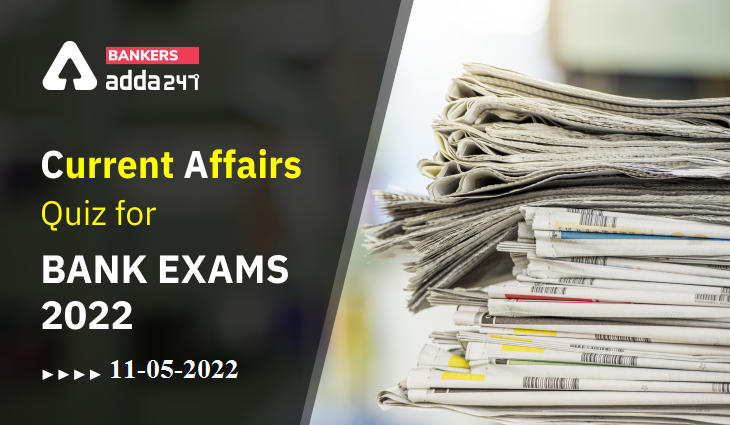 The Current Affairs section constitutes a major part of the General Awareness section in a competitive examination and plays an instrumental role. To supplement your preparation for the General Awareness Section of the upcoming exams like IBPS PO/Clerk Mains, SBI PO Mains and SEBI Grade A Prelims, we are providing you Current Affairs Quiz of 11th May 2022 covering the following topics Headlines: Reliance Industries, Romain Rolland Book Prize 2022, Dhruv helicopter, GISAT-2 satellite.

Q3. Which of the following company has become the first Indian company to record annual revenue of more than a $100 billion?
(a) State Bank of India
(b) Indian Oil
(c) Tata Motors
(d) Bharat Petroleum
(e) Reliance Industries

Q9. What is the theme of International Day of Argania 2022?
(a) Only one Earth
(b) Reimagine. Recreate. Restore.
(c) The Argan tree, symbol of resilience
(d) Beat Air Pollution
(e) Time for Nature

Q10. What is the name of the official mascot for the Fourth Khelo India Youth Games?
(a) Jintu
(b) Dhakad
(c) Robin
(d) Bintu
(e) Neeraj

S3. Ans.(e)
Sol. Reliance Industries become the first Indian company to record annual revenue of more than a whopping $100 billion. The company has recorded a 22.5% rise in net profit for the quarter ended March 2022.

S4. Ans.(d)
Sol. Abhinav Deshwal has won the second gold medal for India in shooting at the ongoing 24th Deaflympics in Caxias do Sul, Brazil.

S7. Ans.(c)
Sol. The eminent Odia litterateur Rajat Kumar Kar passed away due to heart-related ailments. His writing includes Upendra Bhanja literature and has seven non-fiction to his credit. He also contributed to the revival of the dying art of Pala of Odisha.

S9. Ans.(c)
Sol. The day will be celebrated this year under the theme “The Argan tree, symbol of resilience” and will serve to raise international awareness around the tree, its ecosystem, and the important position it holds in Moroccan culture and heritage.

S14. Ans.(a)
Sol. The Reserve Bank of India has given its nod to Equitas Small Finance Bank and its parent company Equitas Holdings Ltd’s merger plan, subject to certain restrictions.