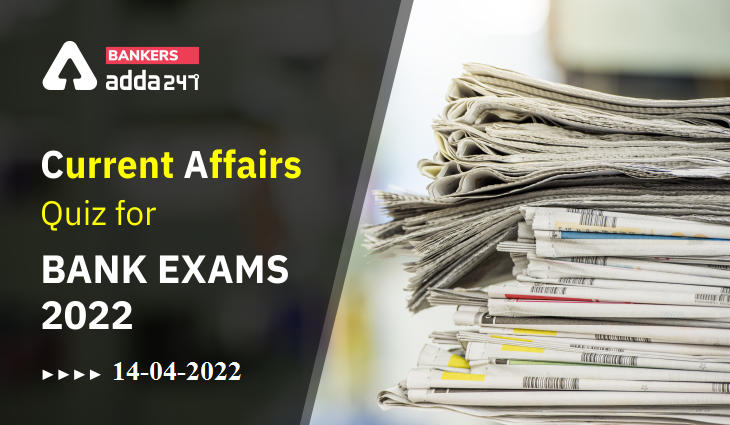 Q3. The Conference Amrit Samagam was organised by which ministry as a part of Azadi ka Amrit Mahotsav celebrations?
(a) Ministry of Social Justice and Empowerment
(b) Ministry of External Affairs
(c) Ministry of Women and Child Development
(d) Ministry of Culture
(e) Ministry of Home Affairs

Q9. Which country has become the first country in the world to give legal rights to wild animals?
(a) Ghana
(b) Ecuador
(c) Togo
(d) Burkina Faso
(e) Benin

Q12. Who among the following will be honoured with the inaugural Lata Deenanath Mangeshkar Award?
(a) Narendra Modi
(b) Asha Parekh
(c) Jackie Shroff
(d) Rahul Despande
(e) All of the above

Q14. Which of the following bank will divest its entire stake of 4% in India SME Asset Reconstruction Company for nearly Rs 4 crore?
(a) Axis Bank
(b) ICICI Bank
(c) HDFC Bank
(d) Bank of Baroda
(e) Bank of Maharashtra

S3. Ans.(d)
Sol. The Union Minister of Home Affairs and Minister of Cooperation, Shri Amit Shah, inaugurated the “Amrit Samagam”, a conference of tourism and culture ministers of the country, in New Delhi.

S4. Ans.(a)
Sol. The fourth edition of the ‘2+2’ Ministerial dialogue between India and the United States was held on April 11, 2022 in Washington DC.

S6. Ans.(d)
Sol. The National Mineral Development Corporation (NMDC), under Ministry of Steel has won one gold and one silver award at the 80th SKOCH Summit and SKOCH Awards.

S8. Ans.(a)
Sol. The International Turban Day is celebrated every year on April 13 since 2004 to bring awareness of the strict requirement on Sikhs to put the turban as a mandatory part of their religion.

S9. Ans.(b)
Sol. Ecuador, a South American Country, became the first country in the world to give legal rights to wild animals.

S12. Ans.(e)
Sol. PM Narendra Modi to be honoured with 1st Lata Deenanath Mangeshkar Award. Among the other awardees will be singer Rahul Despande, who will receive the Master Deenanath Award besides three other special awardees including veteran actress Asha Parekh, actor Jackie Shroff and the Mumbai Dabbawalas, represented by Nutan Tiffin Suppliers.