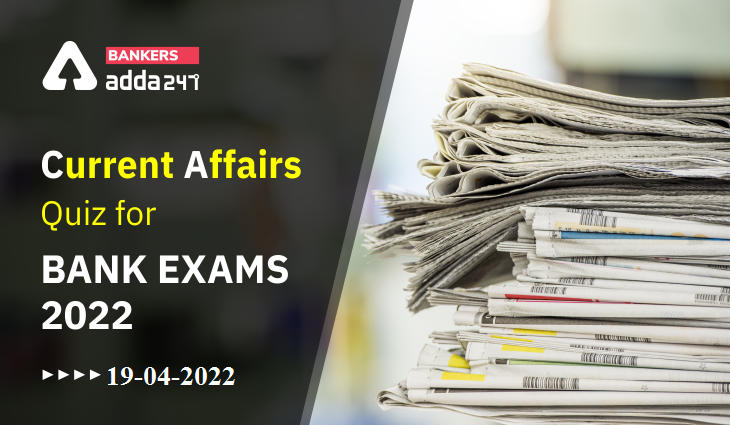 Q1. Under the ‘Hanumanji Char Dham’ project, PM Modi has unveiled the 108ft tall statute of Lord Hanuman Ji in West Direction of the country, in which city?
(a) Patan
(b) Bhavnagar
(c) Morbi
(d) Bhuj
(e) Shimla

Q9. Top Indian swimmer Sajan Prakash won the men’s 200m gold medal at the Danish open in which of the following categories?
(a) Butterfly
(b) Freestyle
(c) Backstroke
(d) Breaststroke
(e) None of these

Q13. What is the theme of World Heritage Day 2022?
(a) Heritage for Generations
(b) Shared Culture’, ‘Shared heritage’ and ‘Shared responsibility
(c) Complex Pasts: Diverse Futures
(d) Heritage and Climate
(e) Your Window to the World

S4. Ans.(c)
Sol. Now MoHUA has launched Phase II of the program in additional 126 cities to cover 28 lakh street vendors and their families.

S6. Ans.(d)
Sol. Prime Minister Narendra Modi inaugurated the Pradhanmantri Sangrahalaya, or Prime Ministers’ Museum, in New Delhi, to honour the efforts of all 14 Indian Prime Ministers since independence, regardless of ideology or duration in office.

S8. Ans.(b)
Sol. NITI Aayog is about to launch National Data and Analytics Platform (NDAP) in May to provide government data in a user-friendly format, promoting data-driven decision making and research.

S11. Ans.(d)
Sol. The 40th edition of Hunar Haat begins in Mumbai. The 12-day event is aimed at providing exposure and employment opportunities to artisans, craftsmen, and traditional culinary experts from across the country.

S12. Ans.(e)
Sol. Every year on April 18, the United Nations commemorates World Heritage Day. The Day is observed to preserve the human heritage and recognize the efforts of the organizations working for it.

S14. Ans.(e)
Sol. In the films category, Shoojit Sircar was honoured with the Director Of The Year award for Sardar Udham.