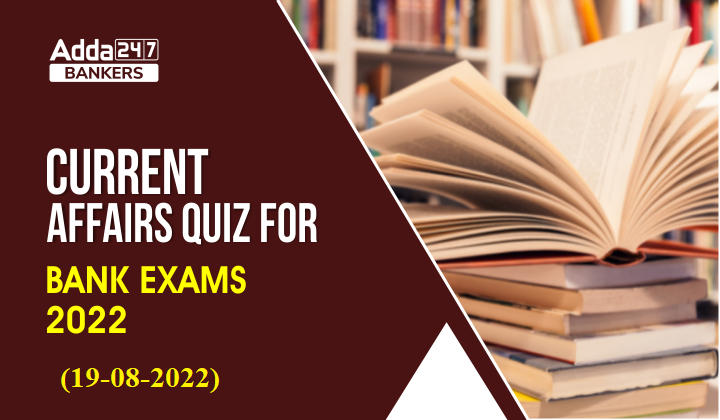 Q1. Which regulatory body is organizing its first hackathon “Bima Manthan 2022” with the theme ‘Innovation in Insurance’ in August 2022?
(a) NABARD
(b) RBI
(c) IRDAI
(d) SEBI
(e) SIDBI

Q5. Kevin O’Brien, who recently announced his retirement, is associated with which of the following national cricket teams?
(a) Ireland
(b) England
(c) South Africa
(d) New Zealand
(e) Australia

Q6. Who among the following has been appointed to the high-level UN internet panel on internet governance in August 2022?
(a) Vinod Dham
(b) Sabeer Bhatia
(c) Amit Singhal
(d) Alkesh Kumar Sharma
(e) Ruchi Sanghvi

Q8. The recently launched “Manthan” Platform is associated with which of the following?
(a) Train tracking system in Railways
(b) Better industry and R&D collaboration
(c) Indigenous Products in Indian Army
(d) Private Players collaboration in Space Technology
(e) Collaboration between different departments of Government

Q10. Bajaj Electricals has appointed who among the following as the MD and CEO of the company in August 2022?
(a) Sunil Nayyer
(b) Deba Goshal
(c) Manish Sharma
(d) Anuj Poddar
(e) Manjit Singh

Q14. Who has hand over to the Indian Army the much-awaited Future Infantry Soldier as a System (F-INSAS)?
(a) Smriti Irani
(b) Amit Shah
(c) Narendra Modi
(d) Rajnath Singh
(e) Nitin Gadkari

S3. Ans.(e)
Sol. The Centre and the board of National Bank for Financing Infrastructure and Development (NaBFID) have appointed Rajkiran Rai G as its Managing Director (MD) for five years.

S5. Ans.(a)
Sol. Ireland all-rounder Kevin O’Brien, remembered in the world of cricket for his whirlwind century against England in the 2011 ICC World Cup, which helped the Irish pull off one of the biggest upsets in 50-over cricket, has announced his retirement from international cricket.

S7. Ans.(c)
Sol. Asia’s Oldest Football Tournament Durand Cup has begun. The 131st edition of the Durand Cup 2022 has been kicked off.

S8. Ans.(b)
Sol. The launch of Manthan, a platform that promises to augment our efforts to build and nurture industry participation in R&D, is also a testimony of our commitment to the UN’s SDG goals.

S9. Ans.(e)
Sol. The government approved a startup loan of Rs 1.15 crore to a bioplastics firm for commercialising “compostable” plastic and mitigating the usage of Single Use Plastics.

S11. Ans.(b)
Sol. Meghalaya is all set to host the upcoming 2nd edition of the North East Olympics.The Games will be special as Meghalaya is celebrating the 50th year of its Statehood. The maiden Olympic games of the region were held in Manipur in October 2018.

S12. Ans.(a)
Sol. HDFC Bank has announced the launch of a new campaign titled ‘Vigil Aunty’. It aims to encourage people across the country to practise safe banking habits.

S13. Ans.(e)
Sol. Zomato-Backed Shiprocket Becomes India’s 106th Unicorn After Raising $33.5 Mn. Shiprocket is valued at $1.2 Bn in the latest funding round, joining Delhivery, Xpressbees, and BlackBuck in the list of logistics startups to turn unicorn.

S14. Ans.(d)
Sol. Defence Minister of India, Rajnath Singh handed over to the Indian Army the much-awaited Future Infantry Soldier as a System (F-INSAS) at the unveiling ceremony of various defence and strategic systems held in Delhi.