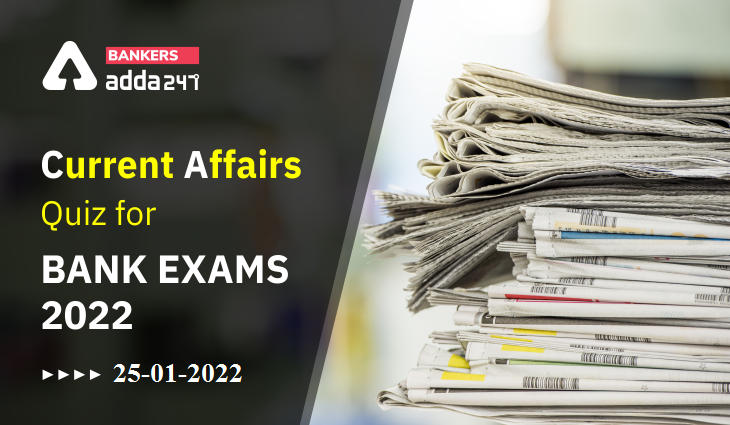 25th December Current Affairs 2022: Here, we are providing the 25th January Current Affairs Quiz. These types of topics are important for candidates who prepare for Bank Exam 2022. In this article, we are covering the following topics Headlines:

Q1. India’s first para-badminton academy has been set up in which city?
(a) Chennai
(b) Hyderabad
(c) Lucknow
(d) Pune
(e) Kanpur

Q7. Which of these leaders has been conferred with the Netaji Award 2022 by the Netaji Research Bureau?
(a) Xi Jinping
(b) Shinzo Abe
(c) Vladimir Putin
(d) Joe Biden
(e) Imran Khan

Q9. What is the theme of the International Day of Education in 2022?
(a) Recover and Revitalize Education for the COVID-19 Generation
(b) Education: A Key Driver for Inclusion and Empowerment
(c) Teaching in Freedom, Empowering Teachers
(d) Right to Education
(e) Changing Course, Transforming Education

Q14. Which company has signed a pact with the University of Oulu, Finland, to accelerate research and standardisation in 6G technology?
(a) Vi
(b) BSNL
(c) Reliance Jio
(d) Airtel
(e) MTNL

S1. Ans.(c)
Sol. India’s first para-badminton academy has been set up in Lucknow, Uttar Pradesh. It has all the advanced equipment and facilities.

S3. Ans.(d)
Sol. January 23 is being observed as Parakram Diwas in India, to mark the birth anniversary of the legendary freedom fighter Netaji Subhash Chandra Bose.

S6. Ans.(c)
Sol. The NATO (North Atlantic Treaty Organization) member countries will be conducting a 12-day maritime exercise in the Mediterranean Sea from January 24, 2022. The name of the maritime exercise is “Neptune Strike ’22”.

S7. Ans.(b)
Sol. The former Japanese Prime Minister Shinzo Abe has been conferred with the Netaji Award 2022 by the Netaji Research Bureau, based in Kolkata.

S13. Ans.(d)
Sol. Swedish defence company ‘Saab’ had been selected by the Indian Armed Force through a competitive programme for the supply of single-shot anti-armour weapon AT4.

S14. Ans.(c)
Sol. Jio Platforms (JPL) signed a pact with the University of Oulu, Finland, to accelerate research and standardisation in 6G technology.

S15. Ans.(e)
Sol. The optimal hedge ratio for the External Commercial Borrowings (ECBs) raised by firms in India is estimated at 63% for the periods of high volatility in the foreign exchange (forex/FX) market, according to a RBI Working Paper.