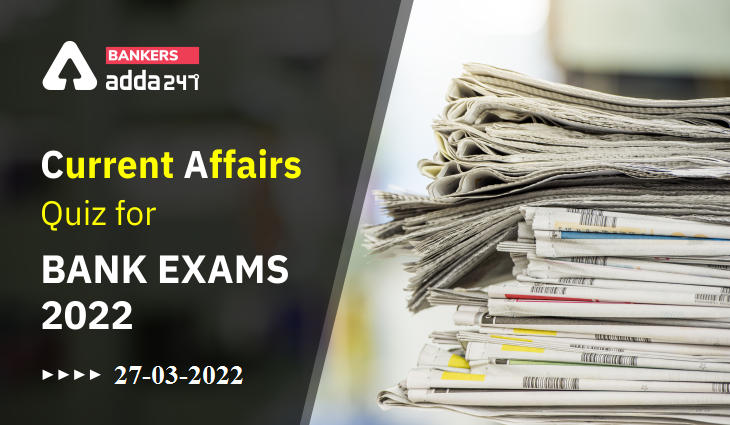 Q9. The North Atlantic Treaty Organization (NATO) has approved an extension in the tenure of its Secretary-General Jens Stoltenberg by a year. Where is the headquarters of NATO?
(a) Dhaka, Bangladesh
(b) Rome, Italy
(c) NewYork, USA
(d) Brussels, Belgium
(e) Paris, France

S2. Ans.(a)
Sol. Gujarat has retained the top position in the second edition of NITI Aayog’s Export Preparedness Index 2021. The first edition was released in 2020.

S3. Ans.(b)
Sol. The UN Conference on Trade and Development (UNCTAD) has pegged India’s economic growth rate for 2022 to 4.6 percent due to the ongoing Ukraine-Russia conflict. Earlier this rate was projected at 6.7%.

S6. Ans.(e)
Sol. Lt. Gen. Vinod G. Khandare (retd.) has been appointed as Adviser in the Ministry of Defence. He will work closely with the Defence Secretary. Lt. Gen. Khandare superannuated from the Army end-January 2018. From then till October 2021, he served as the Military Adviser in the National Security Council Secretariat (NSCS) under the Prime Minister’s Office.

S7. Ans.(c)
Sol. Mobility firm Ola has signed an agreement to acquire neo bank Avail Finance which provides financial services to the blue-collared workforce and has over 6 million users. The acquisition is a key step in Ola’s broader push into the fintech space as it looks to build a mobility-focused financial services business under Ola Financial. Bhavish Aggarwal is the CEO of Ola.

S8. Ans.(b)
Sol. In a major boost to the Government’s “Make in India” Initiative, the Airports Authority of India under its R & D initiative, has entered into an agreement with Navratna Defence PSU Bharat Electronics Limited for the joint, indigenous development of systems for air traffic management and surface movement of aircraft at airports in the country which were hitherto being imported.

S9. Ans.(d)
Sol. Each member country has a permanent delegation at NATO’s political headquarters in Brussels.

S10. Ans.(a)
Sol. Across the Union Territories, Delhi has performed the best, followed by Jammu and Kashmir, Chandigarh and Puducherry.