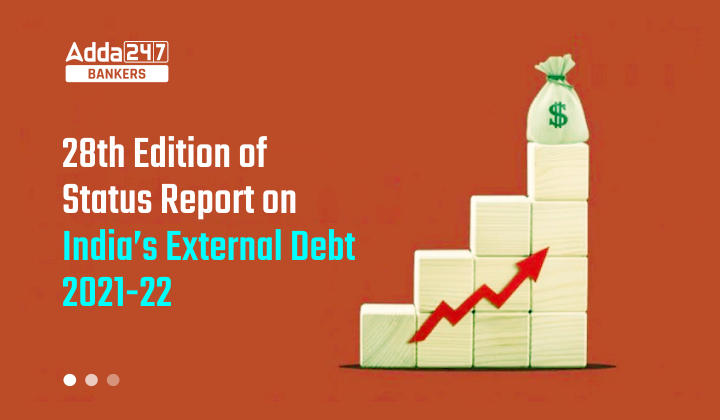 28th Edition of Status Report on India’s External Debt 2021-22 released: Status Report on India’s External Debt 2021-22 has been announced by the External Debt Management Unit (EDMU) of the Department of Economic Affairs, Ministry of Finance. The released report is the 28th edition of the Status Report on India’s External Debt 2021-22. India’s external debt at the end of March 2021 was US$ 573.7 billion which has grown by 8.2 percent and at the end of March 2022, it has risen to US$ 620.7 billion. 53.2 percent of India’s external debt was denominated in the US dollar, and Indian rupee-denominated debt, estimated at 31.2 percent, was the second largest. The sustainability of India was better than the Low-and-Middle Income Countries (LMICs) as a group and vis-à-vis many of them individually while considering various debt vulnerability indicators.

Sovereign External Debt (SED) has been amounted to US$ 130.7 billion at the end of March 2022 increasing by 17.1 percent over the level a year ago. The increment in the Sovereign External Debt introspects that additional SDRs(Special Drawing Rights) are issued by the IMF during 2021-22. At the end March 2021 SDRs was US$ 5.5 billion which has risen to US$ 22.9 billion. FPI holding of G-Sec, on the other hand has been reduced to US$ 19.5 billion from US$ 20.4 billion which was estimated a year ago.

Non-sovereign external debt at the end of March 2022 was estimated to be US$ 490.0 billion. In comparison to 2021 Non-Sovereign External Debt recorded a growth of 6.1 percent. 95 percent of Non-Sovereign Debt included CBs, NRI deposits, and short-term trade credit. The short-term trade credit rose significantly by 20.7 per cent to US$ 117.4 billion as at end-March 2022 on the back of a surge in imports during 2021-22.