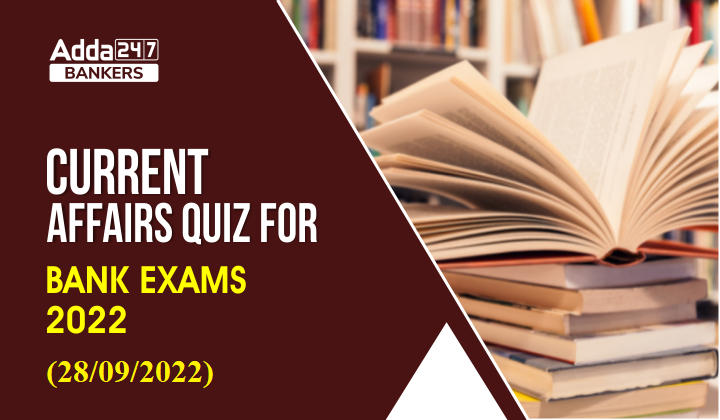 Q1. Indian Railways has announced that it is installing Real-Time Train Information System (RTIS) on the locomotives and trains. It has developed in collaboration with which of the following institute?
(a) Indian Space Research Organization
(b) Defence Research and Development Organization
(c) Hindustan Aeronautics Limited
(d) Electronics Corporation of India Limited
(e) Bharat Heavy Electricals Limited

Q6. An Oscar-winning actress Louise Fletcher passed away recently at the age of 88 in France. She is from which country?
(a) France
(b) Russia
(c) United Kingdom
(d) USA
(e) Israel

Q7. Who among the following has clocked the lowest time to complete a marathon for the world record in Berlin Marathon?
(a) Kenenisa Bekele
(b) Mo Farah
(c) Grace Sugutt
(d) Eliud Kipchoge
(e) Brigid Kosgei

Q8. The Bathukamma festival is associated with which of the following state/UT of India?
(a) Kerala
(b) Telangana
(c) Tamil Nadu
(d) Maharashtra
(e) Odisha

Q10. India will get its first flex-fuel car imported from which country?
(a) Brazil
(b) USA
(c) UK
(d) Germany
(e) Norway

Q14. What is the theme of World Rivers Day 2022?
(a) Waterways in our communities
(b) The importance of Rivers to Biodiversity
(c) Water and Sustainable Development
(d) Nature for Water
(e) Water and Jobs

S1. Ans.(a)
Sol. Real-Time Train Information System (RTIS), developed in collaboration with ISRO, is being installed on the locomotives for automatic acquisition of train movement timing at the stations, including that of arrival & departure or run-through.

S3. Ans.(e)
Sol. PM Modi has announced that the Chandigarh airport will be renamed after Shaheed Bhagat Singh as a tribute to the great freedom fighter.

S4. Ans.(b)
Sol. Sanjai Kumar has been appointed as the Chairman & Managing Director of RailTel. He was currently working as director of networking, planning & marketing at the company.

S5. Ans.(b)
Sol. World Rivers Day is observed every year on the fourth Sunday of September. This year, it falls on September 25.

S6. Ans.(d)
Sol. An Oscar-winning actress Louise Fletcher from the USA has passed away at 88 in France. She was awarded the Oscar in 1976 for her role as Nurse Ratched in One Flew Over the Cuckoo’s Nest (1975).

S7. Ans.(d)
Sol. Kenya’s Eliud Kipchoge shattered his own world record on Sunday (25 September), with a time of 2:01:09 to win the Berlin marathon.

S8. Ans.(b)
Sol. Bathukamma is a vibrant, colourful floral festival celebrated with great gusto by the women in Telegana.

S10. Ans.(a)
Sol. India will get its first flex-fuel vehicle, which can run on ethanol blended petrol and battery next month. The Flex Fuel Strong Hybrid Electric Vehicles (FFV-SHEV) imported from Brazil will be used as a pilot to assess its performance in terms of reduced carbon emissions.

S11. Ans.(c)
Sol. World Tourism Day 2022 is observed on 27 September globally. This day is celebrated every year to focus on promoting tourism in various parts of the world.

S12. Ans.(e)
Sol. The theme of World Tourism Day 2022 is ‘Rethinking Tourism’. Everyone will focus on understanding the growth of the tourism sector and reviewing and redeveloping tourism after the COVID-19 pandemic.

S13. Ans.(c)
Sol. Senior bureaucrat Rajendra Kumar has been appointed the director general of the Employees’ State Insurance Corporation, as part of a senior-level bureaucratic reshuffle effected by the Centre.

S14. Ans.(b)
Sol. The theme for this year’s World Rivers Day is ‘The importance of Rivers to Biodiversity’. The absolute need for rivers to keep any civilization going is the focus of this year’s theme.

S15. Ans.(e)
Sol. World Environmental Health Day is observed on September 26, every year. The goal of observing the day is to increase public awareness of the environment’s condition and encourage people to take the required steps to stop it from getting worse.