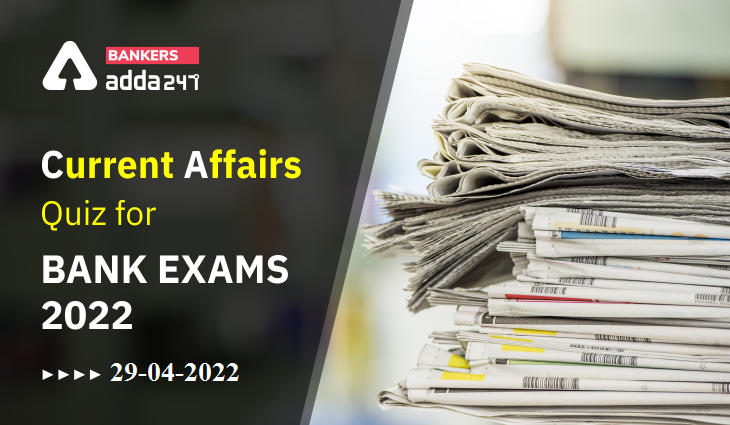 The Current Affairs section constitutes a major part of the General Awareness section in a competitive examination and plays an instrumental role. To supplement your preparation for the General Awareness Section of the upcoming exams like IBPS PO/Clerk Mains, SBI PO Mains and SEBI Grade A Prelims, we are providing you Current Affairs Quiz of 29th April 2022 covering the following topics Headlines: Nasscom, Netflix, IndusInd Bank, Digital & IT transformation, Reliance Industries, SBI Cards.

Q12. Elvera Britto has passed away recently. She was the captain of which sport’s Indian women’s team?
(a) Football
(b) Cricket
(c) Wrestling
(d) Chess
(e) Hockey

S3. Ans.(a)
Sol. The annual World Day for Safety and Health at Work on 28 April promotes the prevention of occupational accidents and diseases globally.

S4. Ans.(e)
Sol. Tata Consultancy Services (TCS) announced the expansion of its decade-long partnership with SBI Cards and Payments Services to power the latter’s next leg of digital transformation.

S5. Ans.(d)
Sol. The National Association of Software and Services Companies (Nasscom) announced that Krishnan Ramanujam, President, Enterprise Growth Group at Tata Consultancy Services, has been appointed as its Chairperson for 2022-23.

S6. Ans.(b)
Sol. Jamtara in Jharkhand has become the only district in the country where all gram panchayats have community libraries.

S7. Ans.(c)
Sol. According to the Sweden based think-tank Stockholm International Peace Research Institute (SIPRI) report, titled ‘Trends in World Military Expenditure, 2021‘, India’s military expenditure is the third highest in the world behind the US and China.