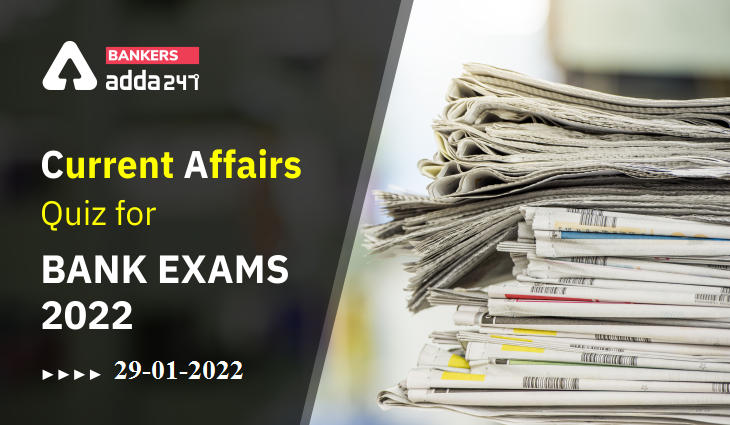 29th December Current Affairs 2022: Here, we are providing the 29th January Current Affairs Quiz. These types of topics are important for candidates who prepare for Bank Exam 2022. In this article, we are covering the following topics Headlines:

Q3. Anil Awachat was the author of which language?
(a) Marathi
(b) Gujarati
(c) Telugu
(d) Malayalam
(e) Konkani

Q6. Which of the following states will establish the first graphene innovation center in India?
(a) Karnataka
(b) Odisha
(c) Goa
(d) Kerala
(e) Haryana

Q8. Which of the following Indian classical dance is associated with late Milena Salvini of France?
(a) Odissi
(b) Sattriya
(c) Kathakali
(d) Bharatanatyam
(e) Kathak

Q9. Which of the following state/ UT Police has bagged 115 Police Medals for Gallantry, out of a total of 189 awarded this year?
(a) Ladakh
(b) Jammu and Kashmir
(c) Assam
(d) Uttarkhand
(e) Sikkim

S2. Ans.(d)
Sol. The Government of India officially handed over India’s flag carrier, Air India to Talace Private Limited, a subsidiary of Tata Group, on January 27, 2022, almost 69 years after acquiring the conglomerate. The total value of the deal is Rs 18,000 crore (US$2.4 billion).

S4. Ans.(b)
Sol. The former Hockey mid-fielder Charanjit Singh has passed away at his residence in Una, Himachal Pradesh, after suffering a cardiac arrest and prolonged age-related illnesses.

S6. Ans.(d)
Sol. India’s first innovation centre for graphene will be set up in Kerala by the Digital University Kerala (DUK), along with the Centre for Materials for Electronics Technology (C-MET) in Thrissur, for Rs 86.41 crore.

S7. Ans.(e)
Sol. The National Common Mobility Card was developed by India’s Ministry of Housing and Urban Affairs in early 2019.

S9. Ans.(b)
Sol. Jammu and Kashmir Police bagged 115 Police Medals for Gallantry (PMG), out of a total of 189 awarded this year. They more than doubled their last year’s tally of 52 PMGs. J&K Police won awards for conducting several counter-insurgency operations in 2019-20. No one has been given the top category president’s police medal for gallantry (PPMG) this time.

S10. Ans.(c)
Sol. Sathyamangalam Tiger Reserve (Erode district, Tamil Nadu) has been given the prestigious TX2 award after its tiger numbers doubled to 80 since 2010.