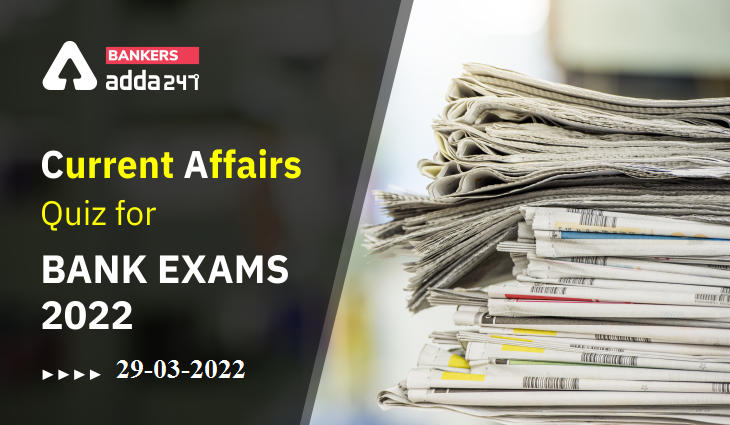 Q1. Which city has topped the most noise polluted city globally, according to the recent ‘Annual Frontier Report, 2022’ published by the UNEP?
(a) Dhaka
(b) Beijing
(c) Cairo
(d) Jakarta
(e) Moradabad

Q8. The Ishan Manthan festival, to showcase culture, crafts and cuisines of North East India, has been organised in which city?
(a) Chennai
(b) New Delhi
(c) Guwahati
(d) Surat
(e) Indore

Q9. What is the name of the web portal launched as a volunteer-driven initiative to bring together “inspiring” stories related to Prime Minister Narendra Modi?
(a) Modi Story
(b) Modi Corner
(c) Modi Life
(d) Modi World
(e) Modi Vlogs

S1. Ans.(a)
Sol. Dhaka, the capital city of Bangladesh, has been ranked as the most noise polluted city globally, according to the recent ‘Annual Frontier Report, 2022’ published by the United Nations Environment Programme (UNEP).

S2. Ans.(c)
Sol. The World Theatre Day is celebrated all over the world on the 27 March since 1962 to promote the art form “theatre” across the world.

S3. Ans.(d)
Sol. Professor Emeritus Wilfried Brutsaert has been named as the Stockholm Water Prize Laureate 2022. He has been awarded for his groundbreaking work to quantify environmental evaporation.

S5. Ans.(c)
Sol. The Kempegowda International Airport in Bengaluru won two the ‘Best Airport’ under the General Category, and the ‘Aviation Innovation’ Award at the event.

S7. Ans.(c)
Sol. India have been declared as the winners of the 3rd edition of SAFF U-18 Women’s Football Championship.The 2022 edition of the international football competition for women’s under-18 national teams was held in Jharkhand at JRD Tata Sports Complex, Jamshedpur.

S11. Ans.(e)
Sol. Every year, the Earth Hour is celebrated worldwide on the last Saturday of the March month to show support for fight against climate change and commitment towards better planet. Earth Hour 2022 is being marked.

S13. Ans.(d)
Sol. The Union Ministry for Environment, Forest and Climate Change has designated 5th of October to be celebrated as National Dolphin Day every year, beginning from 2022.