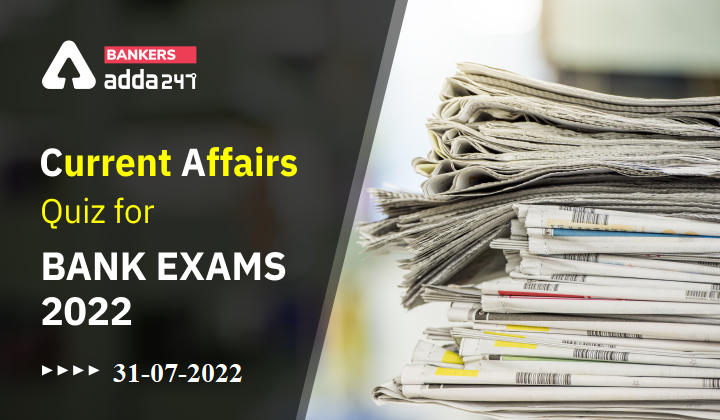 Q4. The ‘Dinesh Shahra Lifetime Award’ is associated with which of the following fields?
(a) Acting
(b) Sports
(c) Music
(d) Literature
(e) Philanthropy

Q5. World Ranger Day is observed on ______ every year. The International Ranger Federation established this day to honour the contribution of Park Rangers to the preservation of nature.
(a) 27th July
(b) 28th July
(c) 29th July
(d) 30th July
(e) 31st July

Q6. Which of the following has become the first state in the country to have dedicated semiconductor policy?
(a) Tamil Nadu
(b) Karnataka
(c) Uttar Pradesh
(d) Gujarat
(e) Maharashtra

Q8. What is the theme of World Day Against Trafficking in Persons 2022?
(a) Focus on the first responders to human trafficking
(b) Victims’ Voices Lead the Way
(c) Use and abuse of technology
(d) Human Trafficking: Call Your Government To Action
(e) Let’s act now to protect and assist trafficking victims

S2. Ans.(a)
Sol. A rare pure pink diamond, believed to be the largest found in 300 years, has been unearthed in Angola, a country in Central Africa.

S3. Ans.(e)
Sol. International Friendship Day is celebrated annually on July 30 and it was first proposed way back in the year 1958 by World Friendship Crusade, an international civil organisation.

S5. Ans.(e)
Sol. World Ranger Day is observed on 31st July every year. The International Ranger Federation established this day to honour the contribution of Park Rangers to the preservation of nature.

S6. Ans.(d)
Sol. The Bhupendra Patel-led Gujarat government has announced a dedicated ‘Gujarat Semiconductor Policy 2022-27’ with a view to generate at least 2,00,000 new employment opportunities during a period of five years.

S8. Ans.(c)
Sol. This year’s theme “Use and abuse of technology” focuses on the role of technology as a tool that can both enable and impede human trafficking.

S9. Ans.(c)
Sol. In Punjab, the Sports Department is going to organise ‘Punjab Khed Mela’ in which events of 30 sports will be held in six groups under 14 to 60 years veteran with an aim to identify talent, make a conducive environment for sports and increase health awareness.

S10. Ans.(e)
Sol. World Day Against Trafficking is observed annually on 30 July to make people aware of who is being trafficked.