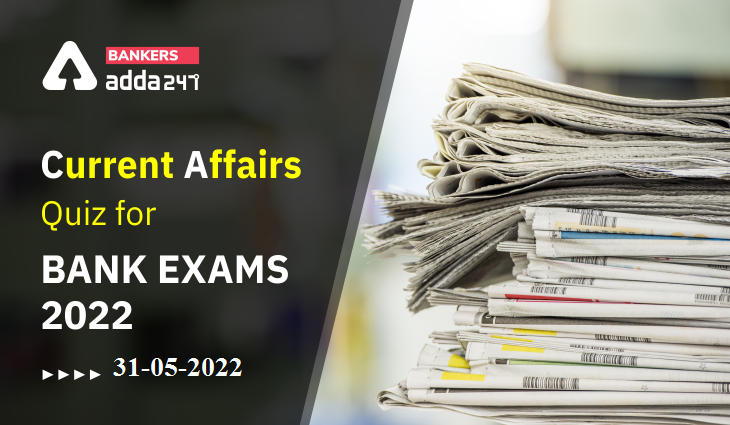 The Current Affairs section constitutes a major part of the General Awareness section in a competitive examination and plays an instrumental role. To supplement your preparation for the General Awareness Section of the upcoming exams like IBPS PO/Clerk Mains, SBI PO Mains and SEBI Grade A Prelims, we are providing you Current Affairs Quiz of 31st May 2022 covering the following topics Headlines: Uniform Civil Code, Industrial Biotech Park, 2022 L’OEil d’Or award, Gujarat Titans, International Day of UN Peacekeepers.

Q5. Which of the following documentry of Filmmaker Shaunak Sen has been honoured with the 2022 L’OEil d’Or award?
(a) Beyond All Boundries
(b) All that Breathes
(c) The World Before Her
(d) Powerless
(e) Great Indian Stories

Q9. Who has won the Women’s T20 Challenge 2022 with a four-run victory over Velocity in the title clash?
(a) Supernovas
(b) Velocity
(c) Trailblazers
(d) Royal Challengers
(e) None of these

Q11. Which of the following country has been chosen as the “Country of Focus” in the 17th Mumbai International Film Festival?
(a) Sri Lanka
(b) Nepal
(c) Myanmar
(d) Bhutan
(e) Bangladesh

Q12. According to the Geological Survey of India, which of the following state has the largest gold reserves in the country?
(a) Bihar
(b) Jharkhand
(c) Chattisgarh
(d) Gujarat
(e) Maharashtra

Q13. What is the theme of the International Day of UN Peacekeepers 2022?
(a) Protecting Civilians, Protecting Peace
(b) People. Peace. Progress. The Power of Partnerships
(c) 70 Years of Service and Sacrifice
(d) Investing in Peace Around the World
(e) Honouring our Heroes

S1. Ans.(d)
Sol. The retired Supreme Court judge Ranjana Desai, who currently heads the Delimitation Commission of India is the Head of the committee.

S3. Ans.(b)
Sol. Reserve Bank of India’s Banknote Survey of Consumers findings has revealed that ?100 was the most preferred banknote while ?2,000 was the least preferred denomination.

S4. Ans.(c)
Sol. Justice Pradip Kumar Mohanty has been appointed as the acting Chairperson of Lokpal by President Ram Nath Kovind, after Pinaki Chandra Ghose completed his tenure as the Lokpal Chief.

S5. Ans.(b)
Sol. Filmmaker Shaunak Sen’s documentary, All That Breathes, has been honoured with the 2022 L’OEil d’Or award. The L’OEil d’Or documentary award, also known as The Golden Eye award, was created in 2015 by French-speaking authors’ society LaScam in collaboration with the Cannes Film Festival.

S7. Ans.(a)
Sol. International Day of UN Peacekeepers- May 29. For the past two decades on this day, UN Peacekeepers, also known as the Blue Helmets, are remembered by the world for their role in promoting security, peace and stability.

S9. Ans.(a)
Sol. Supernovas won the Women’s T20 Challenge 2022 with a four-run victory over Velocity in the title clash.

S10. Ans.(c)
Sol. Elon Musk, the multi-billionaire CEO of Tesla and SpaceX highest-paid executive in the world. Musk has topped the Fortune’s new list of the most highly compensated CEOs on the Fortune 500.

S11. Ans.(e)
Sol. In commemoration of Bangladesh’s 50 years of Independence, the country has been chosen as the ‘Country of Focus this year. A special package of 11 films from Bangladesh including the critically acclaimed film ‘Hasina- A Daughter’s Tale’ will be presented at MIFF 2022.

S12. Ans.(a)
Sol. A survey by the Geological Survey of India has stated that a gold reserve of around 222.88 million tonnes including 27.6 tonnes of mineral-rich ore are present in the Jamui district of Bihar.

S13. Ans.(b)
Sol. The theme for this year’s Day is “People. Peace. Progress. The Power of Partnerships.” Peacekeeping is one of the many tools used by the United Nations to secure global peace and security. UN Peacekeepers is a collective enterprise, which aims to change lives for the better.