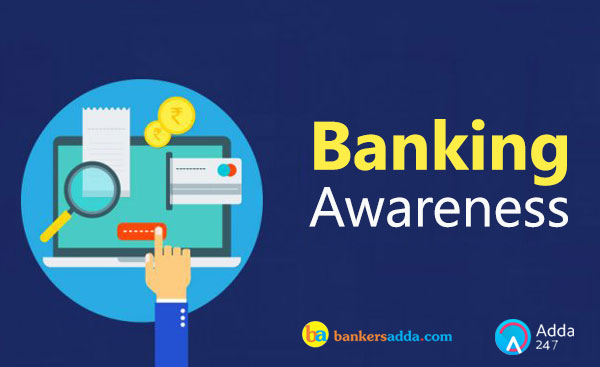 With the increased competition in the field of banking examinations, it has now become very important to cover up all the sections efficiently. One subject that can help you bagging graceful marks in the minimum time in these examinations is Banking Awareness. Banking Awareness Quiz not only helps you deal with the General Awareness Section of Banking Exams but also, the Personal Interview round of Banking Recruitment.
Q1. Where is the Head Office of AU Small Finance Bank?
(a) Muzaffarpur
(b) Fatehpur
(c) Kanpur
(d) Nagpur
(e) Jaipur
Q2. Name the country, which was the largest source of foreign investment in India (21.8 per cent share at market value), followed by the US and the UK, according to a census by the Reserve Bank of India.
(a) UK
(b) Japan
(c) US
(d) Mauritius
(e) Singapore
Q3. Japan has been found to have the best structure of production in the Geneva-based World Economic Forum or WEF’s first ‘Readiness for the future of production report’ and is followed by South Korea, Germany, Switzerland, China, Czech Republic, the US, Sweden, Austria and Ireland in the top 10. WEF was established in-
(a) 1982
(b) 1945
(c) 1971
(d) 1944
(e) 1956
Q4. In the financial year 2016-17, total FDI of US $ 60.08 billion has been received, which is an all-time high. The Cabinet chaired by ______________ has approved amendments in FDI Policy and further liberalized few of the policies of FDI.
(a) Arvind Subramanian
(b) Urjit Patel
(c) Hasmukh Adhia
(d) Arun Jaitley
(e) Narendra Modi

Q5. Paytm has set up a new entity called Paytm Money Ltd that will offer investment and wealth management products and will invest close to ____________ upfront in the new entity.
(a) $20 million
(b) $10 million
(c) $30 million
(d) $05 million
(e) $1 million
Q6. In the field of banking, what does ADF stand for?
(a) Additional Dearness Allowance
(b) Automated Data Flow
(c) Additional Deposit Allowance
(d) Automated Deposit Allowance
(e) None of the given options is true
Q7. Which of the following is governed by the provisions of Section 42 (1) of the Reserve Bank of India Act, 1934?
(a) Bank rate
(b) Reverse Repo Rate
(c) SLR
(d) CRR
(e) MSF

Q8. National Sample Survey Organisation (NSSO) is an organization under the-
(a) Ministry of Finance
(b) Ministry of Rural Development
(c) Ministry of Commerce and Industry
(d) Ministry of Electronics and Information Technology
(e) Ministry of Statistics and Programme Implementation
Q9. BCSBI was registered as a society under the _____________ in February 2006.
(a) Companies Act, 1956
(b) Societies Registration Act, 1860
(c) Banking Regulation Act, 1949
(d) Reserve Bank of India Act, 1934
(e) None of the given options is true
Q10. The Financial Stability Board (FSB) is an international body for the global financial system, has placed India in the league of countries that are ‘compliant or largely compliant’ on the implementation of priority area reforms. In which among the following year FSB was established?
(a) 2001
(b) 2009
(c) 2003
(d) 2015
(e) 1997
Q11. Part of company’s earning or profit which is paid out to share holders is known as _______
(a) Premium
(b) Dividend
(c) Bonus
(d) Sum Assured
(e) Return
Q12. Which of the following economic concepts is categorised on the basis of Current Account or Capital Account or both?
(a) Balance of Payments
(b) Value of the food grain stock of a country
(c) Gross National Product
(d) Gross National Income(GNI)
(e) Total collection of Direct Taxes in a year
Q13. When there is a difference between all receipts and expenditure of the Government of India both capital and revenue it is called-
(a) Revenue Deficit
(b) Budgetary Deficit
(c) Zero Budgeting
(d) Trade Gap
(e) Balance of Payment Problem
Q14. Sukanya Samriddhi Account can be opened up to age of ________ years only from the date of birth.
(a) Five years
(b) Four years
(c) Six years
(d) Eight years
(e) Ten years
Q15. NSDP links are intended to provide quick access to a single comprehensive source of economic and financial data consistent with the data categories and components described in the subscriber’s metadata. NSDP stands for-
(a) National Summary District Page
(b) National Summary Development Page
(c) National Summary Department Page
(d) National Summary Division Page
(e) National Summary Data Page