Skip to content
Latest Banking jobs   »   Full Form of Computer And Some... 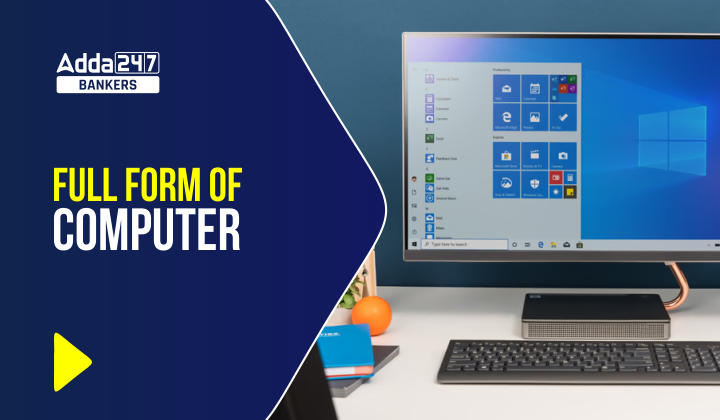 Full Form Of Computer: A computer is an electronic device that stores and processes data in binary form according to the instructions. Knowledge of a computer is a basic requirement in today’s world. A person who is doing preparation for any job interview or preparing for any kind of competitive exam must know the full form of a computer and the list of computer-related full forms. In this article, we have provided you with the Full form of the computer and some other important details related to the computer.

A computer is an electronic device that manipulates information or data. It has the ability to store, process, and retrieve data. The term “computer” in use from the early 17th century, meant one who computes- a person performing mathematical calculations before electronic computers become commercially available. The full form of the computer is given below:

The computer can be categorized in three ways which are given below:

The development of computers is often divided into five generations.

The computers of the first generation used vacuum tubes as the basic components for memory and circuitry for the CPU These tubes, like electric bulbs, produced a lot of heat, and the installations used to fuse frequently. Example: ENIAC, UNIVAC1, IBM 650, IBM 701, etc.

A transistor computer, now often called a second-generation computer, is a computer that uses discrete transistors instead of vacuum tubes. Example:  IBM 1401, IBM 7090 and 7094, UNIVAC 1107, etc.

Third-generation computers were computers that emerged due to the development of the integrated circuit (IC). They were the first steps toward computers as we know them today. Example: IBM 360, IBM 370, PDP-11, UNIVAC 1108, etc.

Computer of the Fourth Generation used Very Large Scale Integrated (VLSI) circuits. VLSI circuits having about 5000 transistors and other circuit elements with their associated circuits on a single chip made it possible to have microcomputers of the fourth generation. Example: IBM PC, STAR 1000, APPLE II, Apple Macintosh, etc.

Computers of this generation are based on microelectronic technology with high computing power and parallel processing. This is the most recent and technologically advanced computer generation. Example: desktops, laptops, tablets, smartphones, etc.

Candidates can check all the computer-related full forms in the given table. These are the basic full form of computer that must be known to the aspirants.

What is the full form of RAM?

The full form of RAM is "Random Access Memory"

What is the full form of COMPUTER?

What is the full form of HTTP?

The full form of HTTP is "Hyper Text Transfer Protocol"

What is the full form of the UPS?

The full form of UPS is "Uninterrupted Power Supply"