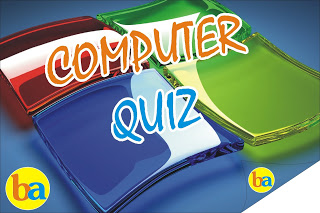 Q1. Which is the first Mechanical calculator?
(a) Abacus
(b) Napier’s Bones
(c) Pascaline
(d) Stepped Reckoner
(e) None of these

S1. Ans.(a)
Sol. Abacus is an instrument that was invented some 2500 years ago primarily in China. It was used in the ancient times for calculating numbers through basic arithmetic system.
S2. Ans.(c)
Sol. Abacus used set of beds to represent the data.
S3. Ans.(a)
Sol. Napier’s bones, also called Napier’s rods, are numbered rods which can be used to perform multiplication of any number by a number 2-9.This process was published by Napier in 1617 an a book titled Rabdologia, so the process is also called rabdology.
S4. Ans.(d)
Sol. An icon is a small graphical representation of a program or file that, when clicked on, will be run or opened. Icons are used with Graphical User Interface (GUI) operating systems, such as Microsoft Windows and the Apple Mac OS, to help quickly identify a type of file or program associated with the icon.
S5. Ans.(d)
Sol. Blinking symbol or arrow on desktop is called cursor.
S6. Ans.(b)
Sol. Help button is available at start button.
S7. Ans.(d)
Sol. The task bar was introduced with Windows 95 and has been part of every version of Windows since then. It is the bar that spans the bottom of the screen and contains the Start button on the left side and the systray on the right. The task bar also includes the current time on the far-right side and can hold shortcuts to programs directly to the right of the Start button.