Q1. In which of the following country, the 4th BIMSTEC Summit will be held?
(a) Myanmar
(b) Nepal
(c) Bangladesh
(d) India
(e) Indonesia

S1. Ans.(b)
Sol. The 4th BIMSTEC Summit will be held in Kathmandu, Nepal. The announcement in this regard was made by Nepal’s Minister for Foreign Affairs Pradeep Kumar Gyawali. The main focus of the summit will be to increase connectivity between the BIMSTEC nations including roads, airways and transmission lines.

Q2. Shubhankar Sharma has recently become the youngest Indian to make the cut in any Major. He is related to which sports?
(a) Badminton
(b) Hockey
(c) Table Tennis
(d) Golf
(e) Chess

S2. Ans.(d)
Sol. Shubhankar Sharma became the youngest Indian golfer to make the cut in any Major after he capped a wonderful back nine to achieve the feat at the 147th Open Championships at Carnoustie, Scotland.

S3. Ans.(c)
Sol. Alisson Becker of Brazil has become the World’s most expensive goalkeeper while transferring clubs from Italy’s Roma to England’s Liverpool for a world record £56 million. The 25-year-old Brazilian has beaten Ederson Moraes (£34.7 million, Benfica to Manchester City).

Q6. The Indian Government has recently announced the launch of a new technology that would help check on vehicle thefts. What is the name of this technology?
(a) MultiRada Technology
(b) MicroPut Technology
(c) MicroDot Technology
(d) MultiPoint Technology
(e) None of the given option is true

S6. Ans.(c)
Sol. The Indian Government has announced the launch of a new MicroDot Technology that would help check on vehicle thefts. Under this, thousands of small dots laser etched will be sprayed with a vehicle identification number on all over the vehicle’s body including its engine.

Q7. The chief Minister of which of the following state government has recently launched ‘e-Pragati core platform’ which is aimed at connecting the citizen to 34 departments, 336 autonomous organisations and 745-plus services?
(a) Jammu & Kashmir
(b) Maharashtra
(c) Haryana
(d) Andhra Pradesh
(e) Kerala

S7. Ans.(d)
Sol. Chief Minister of Andhra Pradesh N. Chandrababu Naidu launched ‘e-Pragati core platform’ at Undavalli. e-Pragati, a forward-looking digital initiative, is aimed at connecting the citizen to 34 departments, 336 autonomous organisations and 745-plus services. Through this project, the State government intends to realise the vision of ‘Sunrise AP 2022’.

Q8. Facebook has confirmed it is working on a new satellite project, named __________, that will provide broadband internet connections to rural and underserved areas.
(a) FBSS- I
(b) Nanchuck
(c) Athena
(d) Atomi
(e) Hercules

S8. Ans.(c)
Sol. Facebook has confirmed it is working on a new satellite project, named Athena, that will provide broadband internet connections to rural and underserved areas. The company aims to launch satellite in early 2019.

Q9. The 28th meeting of the GST Council was held recently in New Delhi. It was chaired by ___________.
(a) Finance Minister Arun Jaitley
(b) PM Narendra Modi
(c) NITI Aayog Vice Chairman Rajiv Kumar
(d) Finance Minister Piyush Goyal
(e) None of the given option is true

S9. Ans.(d)
Sol. The 28th meeting of the GST Council chaired by interim finance minister Piyush Goyal is currently underway. The Council is deliberating upon a number of key issues on its agenda which includes rate revision on a number of items, amendments to the GST law, simplification of return, and the setting up of a National Appellate Tribunal in Delhi.


S10. Ans.(b)
Sol. BIMSTEC stands for Bay of Bengal Initiatives for Multi-Sectoral, Technical and Economic Cooperation. The group was formed in 1997 and it brings together Bangladesh, Bhutan India, Nepal, Sri Lanka, Myanmar and Thailand.
Check out Best Books for RBI Grade B Phase-I and Phase-II Preparation 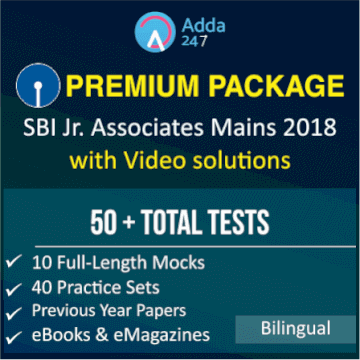