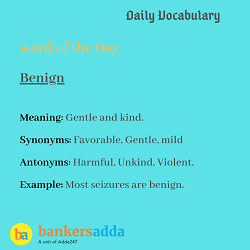 AMNESTY (noun) : आम माफ़ी
Meaning: an official pardon for people who have been convicted of political offences.
Synonyms: forgiveness, immunity, reprieve, absolution
Antonyms: acquittal, amnesty, compurgation, exculpation
Example: It’s a thieves’ amnesty at this moment, and I must not lose the opportunity.

BANE (noun) : विपत्ति
Meaning: a cause of great distress or annoyance.
Synonyms: scourge, plague, ruination, destruction.
Antonyms: benefit, blessing, boon, felicity.
Usage: That evil is malevolent violence, a curse that is the bane of our human existence.

VITIATE (Verb) : भ्रष्ट करना
Meaning: spoil or impair the quality or efficiency of.
Synonyms: annihilate, negate, quash
Antonyms: allow, permit
Usage: You made a good decision, so don’t vitiate it by boasting about your success.

BENIGNANT (adjective) : कृपालु
Meaning: having or marked by sympathy and consideration for others.
Synonyms: benevolent, compassionate, humane, kindhearted.
Antonyms: atrocious, brutal, callous, fiendish.
Usage: The queen had a benignant reputation and was loved for her caring treatment of others.

SECLUSION (Noun) : तनहाई
Meaning: the state of being alone, away from other people
Synonyms: remoteness, aloneness
Antonyms: open, public
Example: In some societies women are kept in seclusion, so that they are hardly ever seen in public.