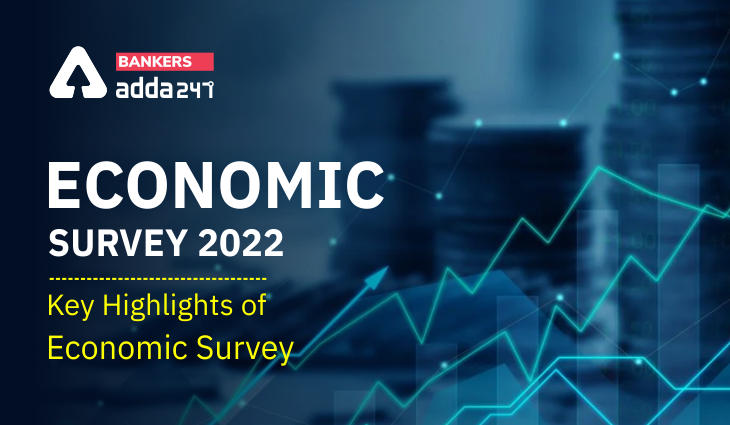 Finance Minister, Nirmala Sitharaman has presented Economic Survey 2021-22 in the Parliament on 31st January 2022. The pre-budget Economic Survey, which is tabled in Parliament ahead of the Union Budget to present the state of the economy and suggest policy prescriptions. The pre-Budget Economic Survey is authored by a team led by Chief Economic Advisor (CEA). Days before the presentation, the Centre appointed economist V Anantha Nageswaran as the new CEA.

What is the Economic Survey?

Here are the key highlights from the Economic Survey 2021-22:

The government sees the Indian economy growing at 8-8.5 per cent in the financial year 2022-23 (FY23). The GDP growth rate for the ongoing financial year 2021-22 (FY22) is estimated at 9.2 per cent. In order to achieve USD 5 trillion GDP by FY’25, India needs to spend about USD 1.4 trillion over this period on infrastructure, according to the Economic Survey.

The main reason for the lower forecast is the non-availability of significant base effects in 2022-23 as compared to 2021-22. In fact, when these base effects were absent in Q3 and Q4 of 2021-22 and economic activities had started to normalize, the average growth in the second half of 2021-22 was only 5.6%.

State of the Economy:

The economic shock of the pandemic has been weathered well by the commercial banking system:

Exceptional year for the capital markets:

Wholesale inflation based on the Wholesale Price Index (WPI) rose to 12.5 per cent during 2021-22 (April to December). This has been attributed to:

The divergence between CPI-C and Wholesale price index Inflation:

This divergence can be explained by factors such as:

With the gradual waning of the base effect in WPI, the divergence in CPI-C and WPI is also expected to narrow down.

As per the National Family Health Survey-5: