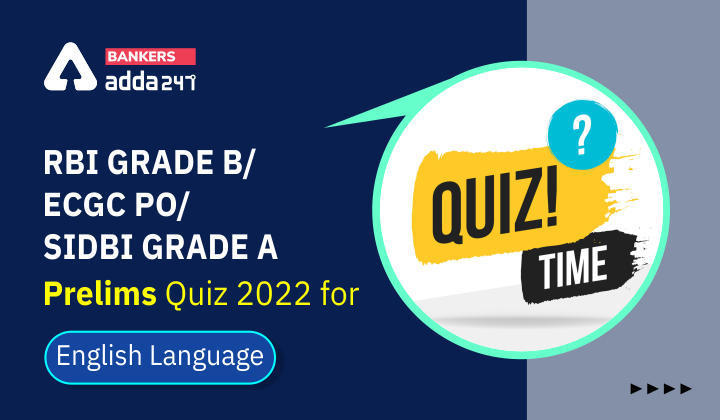 Directions (1-15): Certain words are highlighted in the following sentences. It is possible that one of them has incorrect spelling. Select the word which has been incorrectly spelled. If all of them are correct, choose (e) All are correct.

Q1. The SWIFT system, or Society for Worldwide Interbank Financial Telecommunication, is a secure infrastructure that lets financial institutions exchange information about global monetary transactions such as money transfers.

Q3. Recently, inflation inndices WPI (Wholesale Price Index) and CPI (Consumer Price Index) had made the news because of inflation.

Q5. India this week outlined its record export target for the fiscal year that started on April 1, saying it would send trade delegations to countries such as Morocco, Tunisia, Indonesia and the Philippines to explore ways to boost shipmants.

Q6. Russian gymnast Ivan Kuliak, who received criticism outside of Russia for wearing a pro-war symbol on a podiam next to a Ukrainian athlete, has received a one-year ban for his actions.

Q7. The NASA InSight lander, which has been revealing the mystirious interior of Mars since 2018, is coming to an end.

Q8. Just when it seemed like Finland and Sweden’s accession into NATO was imminent, Turkey has taken its allies by surprise by throwing a rench into the works.

Q9. Since the start of the year, investors have been moving money out of China, driven by concerns about rising lockdowns in major cities, and Beijing’s close ties with Moscow in the wake of Russia’s invasion of Ukraine.

Q11. Pollution caused one in six deaths worldwide in 2019, a new study has revealed — more than the annual global tolls for war, malaria, HIV, tuberculosise, drugs or alcohol.

Q12. The Japanese island chain of Okinawa marked the 50th anniversary on Sunday of the end of US occupation and its return to Japan with ceremonies and celebrations amid growing worry about its proximitee to an increasingly assertive China.

Q13. The British East India Company came to India as traders in spices, a very important commodity in Europe back then as it was used to priserve meat.

Q14. After Renault announced its departure this week from the Russian auto market amid the country’s war with Ukraine, Moscow’s mayor announced its factory will be used to restart the defunct Soviet-era Moskvich car brand.

Q15. Ever since the “Partygate” scandal rocked Boris Johnson’s premiership at the end of last year, the British Prime Minister has repeatedly dogged questions about his future by asserting that what the public wants is for politicians to get on with running the country, not obsess over events that took place nearly two years ago.

S1. Ans (e)
Sol. All the spellings are correct.

S9. Ans (e)
Sol. All the spellings are correct.

S14. Ans (e)
Sol. All the words are correctly spelled.