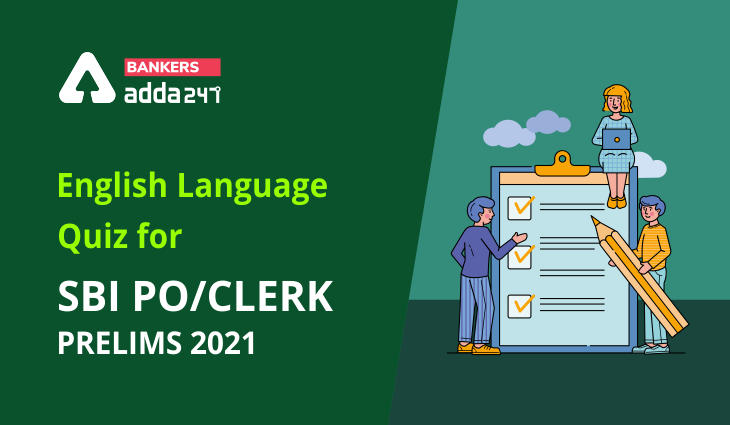 Directions (1-5): Rearrange the following Six sentences (A), (B), (C), (D), (E) and (F) in the proper sequence to form a meaningful paragraph.
A. The ASER sample study estimates that 14% of this age group — a total of 125 million young Indians in this category — are not enrolled.
B. Moreover, learning outcomes for those who had progressed to higher levels of schooling were shockingly low: only 43% of the youth could solve an arithmetic problem involving division of a three-digit number by a single digit; among those who were no longer in school, the percentage was sharply lower.
C. If there is one strong message from the findings of the Annual Status of Education Report (Rural) 2017, it is that the Right of Children to Free and Compulsory Education Act should cover the entire spectrum of 18 years, and not confine itself to those aged 6 to 14.
D. Unfortunately, the state of rural elementary education is far from encouraging. To begin with, only 5% of the respondents in the survey, which was aided by the NGO Pratham, reported doing any kind of vocational course, and even among this small minority a third were enrolled for three months or less.
E. It is absolutely essential for all of them to get an education that equips them with the skills, especially job-oriented vocational capabilities, if the expectation of a demographic dividend is to be meaningful.
F. Guaranteed inclusion will empower those in the 14-18 age group who are not enrolled anywhere, and help them acquire finishing education that is so vital to their participation in the workforce.

Q1. If C is the First sentence of the paragraph, which of the following should be the third sentence after rearrangement?
(a) F
(b) B
(c) A
(d) D
(e) E

Q2. If C is the First sentence of the paragraph, which of the following should be the fifth sentence after rearrangement?
(a) B
(b) E
(c) F
(d) D
(e) A

Q3. If C is the First sentence of the paragraph, which of the following should be the Fourth sentence after rearrangement?
(a) F
(b) E
(c) D
(d) A
(e) B

Q4. If C is the First sentence of the paragraph, which of the following should be the Last(Sixth) sentence after rearrangement?
(a) F
(b) D
(c) B
(d) E
(e) A

Q5. If C is the First sentence of the paragraph, which of the following should be the Second sentence after rearrangement?
(a) D
(b) F
(c) E
(d) A
(e) B

Directions (6-10): The following question consists of a passage in which certain phrase/Sentences are printed in bold. Find out if there is an error in any of the bold part of the sentence, find the correct alternatives to replace those parts from the three options given below each question to make the sentence grammatically correct. If the given sentence is grammatically correct or does not require any correction, choose (e), i.e., “No correction required” as your answer.

Free and compulsory education of children in the 6 to 14 age group in India (6) become a fundamental right when, in 2002, Article 21-A was inserted in the 86th Amendment to the Constitution. This right was to be governed by law, as the state may determine, and the enforcing legislation for this came eight years later, as the Right of Children to Free and Compulsory Education (RTE) Act, 2010, or the RTE Act.

(7) With examples from all around hundred countries which having various and similar pieces of legislation or regulations already in place, there were practices drawn from similar experiences. (8) Since its enactment, the RTE Act has been lauded and disparaged. But there has been a concern not only over its provisions but also about the lacunae in the school education system. However, there are clauses in the Act (9) which has enormous catalytic potential but it have gone largely untouched and unnoticed. A focus on three of these provisions can result in an immediate and discernible impact.

The RTE Act is a game-changer in that it establishes that the onus to ensure free and compulsory education lies on the state. (10) However, the ‘compulsory’ and ‘state liability’ part needs to be imbibed by the educational bureaucracy, which is now lacking.

Directions (11-15): Which of the words/phrases (a), (b), (c) and (d) given below should replace the words/phrases given in bold in the following sentences to make it meaningful and grammatically correct. If the sentence is correct as it is and ‘No correction is required’, mark (e) as the answer.

Q11. The global swirl would be caused by the fact that such a finding would go against the current news of the spread of Indo-European languages across Eurasia and also against current generated evidence.
(a) frequent, froth, origin
(b) heave, subside, common
(c) churning, understanding, genetic
(d) subside, see, arising
(e) No change required

Q12. What the world witnessed in the past few days at the United Nations, on a resolution demanding that the U.S. vigorous its recognition of Jerusalem as the capital of Israel, was an unpredicted display of the arrogance of power.
(a) witnessed, rescind, unprecedented
(b) viewer, equaled, relating
(c) see, encourage, differently
(d) observe, frequent, limit
(e) No change required

Q13. The recent trend of intense in imports indicates that the government may have moved too late to curbing them, but flawed market timing isn’t the real issue.
(a) extreme, unmatched, limitation
(b) excess, check, nullify
(c) abate, viewer, disturb
(d) moderation, curb, flawed
(e) No change required

Q15. The Indian economy’s energy mix needs to be structure through investments in clean renewable sources of energy like solar, wind, hydro, geothermal and low-emissions bioenergy, and by lift the level of energy efficiency through investments in building retrofitting, grid upgrades, and industrial efficiency.
(a) shape, along, causing
(b) remodeled, raising, retrofits
(c) figure, pull, and
(d) component, clear, common
(e) No change required

S1. Ans.(c)
Sol. The correct choice is CFAEDB. Statement A is the third sentence and follows F, ASER Abbreviation is used here, which was introduced in the First Sentence C. Also, it mentions “this category’ which refers to the 14-18 age group discussed in Statement 2 i.e. F.

S3. Ans.(b)
Sol. The correct choice is CFAEDB.
‘Them’ in sentence E “125 million young Indians in this category — are not enrolled”.

S4. Ans.(c)
Sol. The correct choice is CFAEDB.
Statement B is the concluding sentence.

S6. Ans.(b)
Sol. Option B is the appropriate choice. Past Indefinite tense is required here, For this reason other options can be eliminated easily.

S7. Ans.(c)
Sol. Option C is the most appropriate choice here. Other options can be ruled out as they are grammatically incorrect.

S9. Ans.(c)
Sol. Option C is the most appropriate choice here. Plural verb “have” is the correct usage.

S11. Ans.(c)
Sol. Correct Choice is Option C. Churning-a container in which cream is stirred or shaken to make butter,(with reference to liquid) move or cause to move about vigorously,(of a broker) encourage frequent turnover of (investments) in order to generate commission.
synonyms- be turbulent, heave, boil, swirl, toss, seethe, foam, froth
Near Antonyms of churn-abate, calm, subside
Genetic-relating to genes or heredity, relating to origin, or arising from a common origin.

S15. Ans.(b)
Sol. Correct Choice is Option B.
Modeled means change the structure or form of (something, especially a building),shape (a figure or object) again or differently.
Raising-lift or move to a higher position or level.
Retrofits-add (a component or accessory) to something that did not have it when manufactured, an act of retrofitting a component or accessory