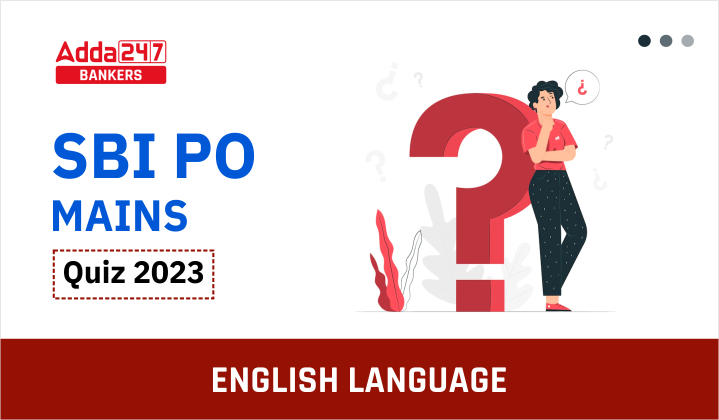 Q7. Even as top market voices debate whether current prime minister Narendra Modi would get a second term in Lok Sabha elections 2019 and its ____________________ on the stock markets, Porinju Veliyath says that the question is ____________________ for long-term investors.
(a) impact; beside the mark
(b) betrayal; an axe to the grind
(c) qualification; putting two and two together
(d) drawing; drawing a blank
(e) venality; calling in question

Q9. His oil paintings are ____________________, with a dreamlike quality that sets them apart, his characters pictured against gentle scenery and striking skies. Many of his landscapes are unmistakably Yorkshire-sweeping valleys dotted with barns, towering mill chimneys, ____________________ terraces and wild moorland.
(a) innocuous; turned down
(b) parsimonious; butt in
(c) restive; drawing a blank
(d) commensurate; picked to pieces
(e) distinctive; cheek-by-jowl

Q10. A three-judge bench of the Supreme Court in a verdict on Wednesday expressed different opinions on this with one saying that the provision of ____________________ has failed to become a ____________________ and the other two holding that a larger bench had already decided its continuance in the rarest of rare cases.
(a) maiden speech; aberration
(b) a left-handed compliment; calumny
(c) a cuckoo in the nest; acrimony
(d) capital punishment; deterrent
(e) a wild-goose chase; venality

Directions (11-15): Read each sentence to find out whether there is any grammatical error in it. The error, if any, will be one part of the sentence. The number of that part is the answer. If there is no error, the answer is (E). (ignore the errors of punctuation, if any.)

S1. Ans. (b)
Sol. Idioms:
throw cold water means discourage;
end up in smoke means to fail;
carry the ball means to be in charge;
smell a rat means to suspect foul dealings;
burn your boots means do something that makes it impossible to return to the previous situation;
Words:
Compliance [noun] means ‘the action or fact of complying with a wish or command’;
The tone of the sentence suggests that Russia is being warned in relation to her compliance with an agreement related to Nuclear Weapons. Among the given idiom, the idiom ‘end up in smoke’ which means ‘to fail’, provides the correct context to the blank, and among the given words, ‘compliance’ is the correct word to fill the blank.
Among the given options, option (b) is the correct answer.

S2. Ans. (e)
Sol. Idioms:
Couch potato means a person who prefers to watch television;
A dark horse means an unknown entry;
A house of cards means an insecure scheme;
Beyond the pale means unreasonable or unacceptable;
Ill at ease means uneasy;
Sameera had lost her final match and it is given that she was very uncomfortable. Among the given options, the idiom ‘ill at ease’ and the word ‘underdog’ provide the correct context to the sentence.
Hence, option (e) is the correct answer.

S3. Ans. (a)
Sol. Idioms:
Wild-goose chase means a pointless search;
Hard of hearing means to be deaf;
House of cards means an insecure scheme;
Maiden speech means first speech;
Couch potato means a person who prefers to watch television;
Words:
Wandering means ‘travelling aimlessly from place to place; itinerant’ ;
Researching means ‘investigate systematically.’;
Wanting [adjective] means ‘lacking in a required or necessary quality’;
Gaining means ‘obtain or secure (something wanted or desirable)’;
Working means ‘functioning or able to function’;
Among the given options, the word ‘wandering’ and the idiom ‘wild-chase goose’ provide the correct context to the blanks of the sentence.
Hence, option (a) is the correct answer.

S4. Ans. (e)
Sol. Idioms:
Driven home means emphasise;
Dressed down means giving a scolding;
Called in question means challenge;
Curried favour means seek favourable attention;
Turned down means reject;
Words:
Demurs [noun] means ‘the action of objecting to or hesitating over something’;
Acrimony [noun] means ‘bitterness or ill feeling’;
The phrase ‘raised by the prospective donor’s father’ suggests that donor’s father raised objection to her daughter offering to donate her kidney, and hence, the hospital, accepting the plea of her father has rejected the plea of a Sikh girl who had offered her kidney.
Among the given options, the idiom ‘turned down’ and the word ‘demurs’ provide the correct context to the blanks.
Hence, option (e) is the correct answer.

S5. Ans. (d)
Sol. Idioms:
Drop in the bucket means a very insignificant amount;
Feather in one’s cap means a new and additional distinction;
Weal and woe means good times and bad times;
Straw in the wind means an indication of what might happen;
Leaps and bounds means rapidly;
Words:
Enervating [enervate, verb] means ‘make (someone) feel drained of energy or vitality’;
Vindicating [vindicate, verb] means ‘clear (someone) of blame or suspicion’;
Terminating [terminate, verb] means ‘bring to an end’;
Blaming [blame, verb] means ‘feel or declare that (someone or something) is responsible for a fault or wrong’;The Senate has refused to ratify the Comprehensive Test Ban Treaty. It means that the US is not interested in stopping her pursuit for Nuclear weapons.
Among the given options, the idiom ‘straw in the wind’ and the word ‘terminating’ provide the correct context to the blanks.
Hence, option (d) is the correct answer.

S6. Ans. (c)
Sol. Idioms:
Dressing down means give a scolding;
Bone of contention means cause for quarrel;
Left-handed compliment means an ambiguous compliment;
House of cards means an insecure scheme;
Cuckoo in the nest means an unwelcome intruder;
Words:
Maintained [maintain, verb] means ‘cause or enable (a condition or situation) to continue’;
Intimated [intimate, verb] means ‘state or make known’;
Belied [belie, verb] means ‘(of an appearance) fail to give a true impression of (something)’;
Galvanized [galvanize, verb] means ‘shock or excite (someone) into taking action’;
Among the given options, the idiom ‘left-handed compliment’ and the word ‘seemed’ provide the correct context to the blanks.
A hint for using the idiom ‘left-handed compliment’ in the first blank can be derived from the phrase ‘two-handed applause’.
Hence, option (c) is the correct answer.

S7. Ans. (a)
Sol. Idioms:
Beside the mark means not to the point;
An axe to the grind means to have a selfish interest;
Putting two and two together means reason logically;
Drawing a blank means find no favour;
Calling in question means challenge;
Words:
Venality [noun] means ‘the condition of being susceptible to bribes or corruption’;
The sentence says that top market voices are debating on whether current prime minister would get a second term in 2019, but Porinju Veliyath seems to believe that its effect on the stock market is not important for long-term investors.
Among the given options, the word ‘impact’ and the idiom ‘beside the mark’ provide the correct context to the blanks. Hence, option (a) is the correct answer.

S8. Ans. (b)
Sol. Idioms:
Weal and woe means good times and bad times;
Null and void means invalid;
Curry favour means seek favourable attention;
Under a cloud means under suspicion;
Feather in one’s cap means a new and an additional distinction;
‘set aside’ is a phrase which means to get dismissed.
Among the given options, the word ‘aside’ and the idiom ‘null and void’ provide the correct context to the blanks.
Hence, option (b) is the correct answer.

S10. Ans. (d)
Sol. Idioms:
Maiden Speech means first speech;
A left-handed compliment means an ambiguous compliment;
A cuckoo in the nest means an unwelcome intruder;
Capital punishment means death punishment;
A wild-goose chase means a pointless search;
Words:
Aberration [noun] means ‘a departure from what is normal, usual, or expected, typically an unwelcome one’;
Calumny [noun] means ‘the making of false and defamatory statements about someone in order to damage their reputation; slander’;
Acrimony [noun] means ‘bitterness or ill feeling’;
Deterrent [noun] means ‘a thing that discourages or is intended to discourage someone from doing something’;
Venality [noun] means ‘the condition of being susceptible to bribes or corruption’;
The phrase ‘rarest of rare cases’ suggests that the given sentence is talking about capital punishment and about its effect as a deterrent.
Among the given options, the idiom ‘capital punishment’ and the word ‘deterrent’ provide the correct context to the blanks.
Hence, option (d) is the correct answer.

S12. Ans. (a)
Sol. Option (a) is the correct choice. Replace ‘nice’ with ‘nicely’ as, ‘nice’ is an adjective that names an attribute of a noun or pronoun, such as sweet, red, or technical and not of a verb. However, ‘nicely’ is an adverb (Adverb of manner). An adverb can be added to a verb to modify its meaning. Adverbs of manner are used to tell us the way or how something is done. Here, “progressing” is the verb associated with the adverb “nicely”.

S13. Ans. (b)
Sol. The error is in part (B) of the sentence. “who” should be used in place of “whom” as “Whom” is in the objective case which is not followed with any verb while; “who” is in the nominative case which requires a verb after that. Moreover, it helps to know the difference between subjects and objects because ‘who’ is used when the subject of a clause is referred and ‘whom’ when the object of a clause is referred. Here, the subject is “He” therefore, it requires a subject pronoun i.e., ‘who’. Thus, the correct answer choice is option (b).

S14. Ans. (d)
Sol. The sentence becomes grammatically incorrect in part (D) of it. Instead of “introduces”, “introduce” is required as after the phrase ‘one of the’ the noun or pronoun used is plural, however, the verb should be in its singular form as there is the use of “to-infinitive” which is followed by the first form of the verb. Hence, option (d) is the most viable choice.