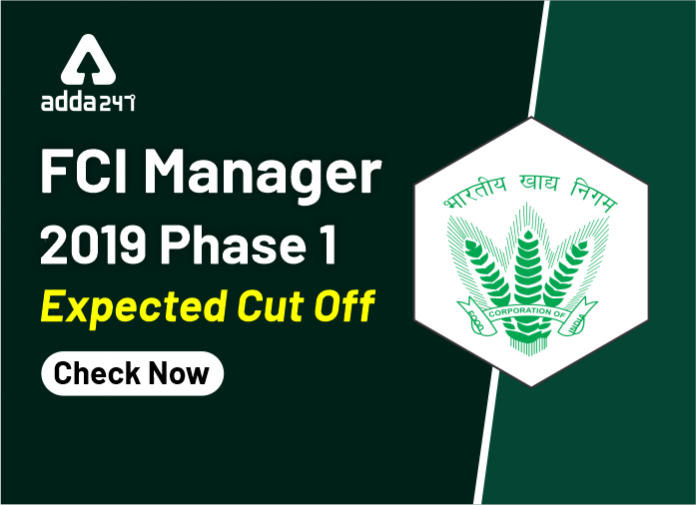 FCI Manager phase-1 exam is over now. With over 330 vacancies, FCI Released the official notification for managers in various departments. All candidates must be looking for FCI manager cut off after the phase 1 exam, so here we have published the expected cut off for fci manager exam. Successful candidates will be appointed in various departments like General, Depot, Technical, Movement, Accounts, Civil Engineering, Electrical, Mechanical Engineering, and Hindi. Thousands of students appeared for the FCI Manager Phase-1 exam, and aspirants appearing for upcoming exam can check the detailed exam analysis of FCI Manager on bankersadda. As preliminary examination is the entry pass to the mains, it is important for the students to clear the cut off that will be decided by the organizing body only. Students who have appeared for it must be looking for the expected cut off so that they can start preparing for the FCI Manager mains exam.

The preliminary phase was conducted on 28th November where students had to complete the exam in 60 minutes, 20 minutes for each section. As there was sectional timing in the exam, students had to manage their time accordingly.Candidates must note that the FCI Manager cut off will be based on the 3 sections combined and hence the overall cut off will only be provided for the selection of candidates in the Phase 2 exam.

FCI Manager official notification released was according to the five zones namely North Zone, South Zone, East Zone, West Zone & NE Zone for various posts of General, Depot, Technical, Movement, Accounts, Civil Engineering, Electrical, Mechanical Engineering, and Hindi. The expected cut off drawn by our expert team based on the good attempts of the students, difficulty level and types of questions asked will lie some where between 65-75(Could be different zonal wise)

☛Candidates to be selected for the Mains exam