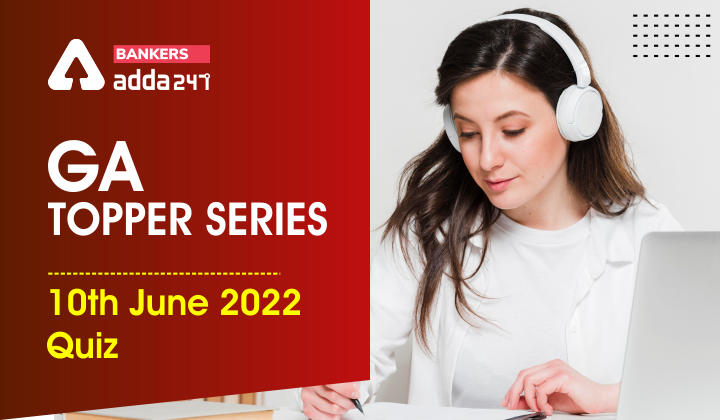 GA Topper Series: 10th June 2022 Quiz: Hello Students, all those students who have cleared their prelims exams in the banking sector must be prepared with every topic in the General Awareness Section for the mains examinations. Bankersadda team has brought you up a new series in which we will come up with 10 questions with the correct answer and the detailed solution to the question.

Q(1-3): On the occasion of World Food safety day, there are many launches by the Ministry of Health and family welfare.

Q1. Which of the following statements are correct regarding State Food Safety Index?

Q3. Logo of which project was launched?

Q5. which ministry has formulated the Sagarmala Young Professional scheme?

(a) Ministry of Skill and development

(b) Ministry of Education

Q6. The Insurance Regulatory and Development Authority of India (IRDAI) reduced the capital required to be held by insurers offering Pradhan Mantri Jeevan Jyoti Bima Yojana (PMJJBY) by almost to how much percent?

Q8. What is the name of the Chinese human crew mission to the international space station?

Q9. ROLAND –GARROS 2022 which was won by Rafael Nadal Parera recently was held at which place?

Q10. Indian Cricketer Mithali Raj announced her retirement, how many years has she had a career in Cricket and where has she hailed from?

On the occasion of World Food Safety Day which was held on the theme ‘Safer food, better health’:

The Eat Right Challenge for Cities and Districts 2021-2022 winners motivate cities to improve their performance under Eat Right India Movement. The top position was shared by Indore and Varanasi

Logo for Ayush Aahar which contains the initials of Ayurveda and Ahara in Devanagari and English language with 5 leaves symbolizing five elements of nature. This logo will be useful for generating a distinct identity, easy identification, and proven health and wellness benefits.

The Ministry of Ports, Shipping, and Waterways (MoPSW) has formulated the Sagarmala Young Professional scheme to engage talented, forward-thinking, and dynamic young professionals in various divisions of the MoPSW.

i. The 3 member mission will complete the assembly and construction of the space station, developing it from a single module structure into a national space laboratory with 3 modules which include the core model Tianhe (“Harmony of the Heavens”) and 2 lab modules, Wentian (“Asking the Heavens”)and Mengtian (“Dreaming of the Heavens”).

ii. During their 6-month stay in the orbit, the 3 member crew will witness the two lab modules, Tianzhou-5 cargo craft and Shenzhou-15 crewed spaceship dock with Tianhe

iii. The crew will rotate with the Shenzhou-15 crew in orbit, and return to the Dongfeng landing site in the Inner Mongolia Autonomous Region, in north China in December 2022.