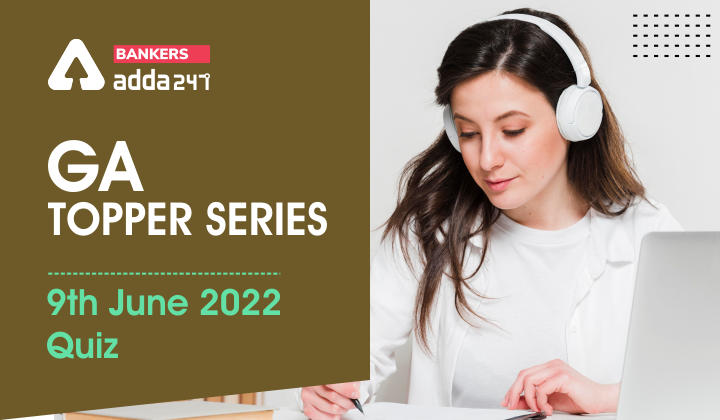 GA Topper Series: 9th June 2022 Quiz: Hello Students, all those students who have cleared their prelims exams in the banking sector must be prepared with every topic in the General Awareness Section for the mains examinations. Bankersadda team has brought you up a new series in which we will come up with 10 questions with the correct answer and the detailed solution to the question.

Q1. World bank slashed the growth rate of India to 7.5%, it was released in which of the following reports?

Q3. Alok Kumar Choudhary took charge as MD of SBI. Whom did he replace?

Q5. Which Edtech company collaborated with SBI to launch Upschool?

Q6. Prime Minister Narendra Modi has launched a special series of coins that are also ‘visually impaired friendly’. The coins of what denomination were launched?

(a) Food safety is universal

(b) Food safety and beyond

Q(8-10). The following questions are in a relation

Q8. Recently RBI has differentiated NBFCs into different categories in its Scale Based Regulation (SBR), How many categories are there?

Q9. What activities are undertaken by NBFC in the base layer are included?

Q10. All the deposit-taking NBFCs irrespective of asset size are included in which category of NBFC?

The World Bank has slashed its growth forecast for India for the current financial year to 7.5 percent, a hefty 1.2 percentage points down from its previous forecast of 8.7 percent. Writing in its latest Global Economic Prospects report released, the World Bank said it cut India’s GDP growth forecast due to headwinds from rising inflation, supply chain disruptions, and geopolitical tensions.

Other reports and their institution

Alok Kumar Choudhary has taken charge as the new Managing Director (MD) of the State Bank of India (SBI).

He replaces former MD Ashwini Bhatia who took charge as a whole-time member of the Securities and Exchange Board of India (SEBI).

The SBI Foundation has launched UpSchool, a digital learning platform for students in classes 1 to 10, in partnership with Khan Academy, an educational non-profit organization in India. The initiation of this partnership took place in Punjab

Prime Minister Narendra Modi has launched a special series of coins that are also ‘visually impaired friendly’. The coins of Re 1, Rs 2, 5, 10, and 20 denominations will have the Azadi Ka Amrit Mahotsav (AKAM) design. They are not commemorative coins and will be part of the circulation. These new series of coins will remind people of the goal of Amrit Kal and motivate people to work towards the development of the country.

The United Nations(UN)’s World Food Safety Day is annually observed across the globe on the 7th June to create awareness about the importance of improving food safety.

NBFC Base Layer (NBFC-BL):  It is the lowest layer, and comprises (a) non-deposit taking NBFCs below the asset size of Rs 1000 crore and (b) NBFCs undertaking the following activities:

NBFC – Middle Layer (NBFC-ML): It is the middle layer and comprises of

(a) all deposit-taking NBFCs (NBFCDs), irrespective of asset size,

NBFC–Upper Layer (NBFC-UL): It comprises those NBFCs which are specifically identified by the RBI as warranting enhanced regulatory requirements. The top ten eligible NBFCs in terms of their asset size shall always reside in the upper layer, irrespective of any other factor.

NBFC– Top Layer (NBFC-TL): It will ideally remain empty. It will be only filled if RBI opinions that there is a substantial increase in the potential systemic risk from specific NBFCs in the Upper Layer. Such NBFCs shall move to the Top Layer from the Upper Layer.